We take a look at players with the most half-centuries across the previous 11 editions of the World Cup.

Continuing with our series of stat articles ahead of the ICC Cricket World Cup 2009, we take a look at players with the most half-centuries across the previous 11 editions. These names have been picked out in accordance to the most 50-plus scores in World Cups.

For all the records Tendulkar holds in one-day internationals, it shouldn t be a surprise seeing him feature on the top of the list. Tendulkar, across six World Cups, has 15 half-centuries and 21 scores of 50-plus. Of the 15, six came in a single edition in 2003. In his maiden World Cup, Tendulkar struck three half-centuries, followed by another three in 1996, just one in 1999 and 2007, and two in his final appearance in 2011. In addition, Tendulkar also has the most centuries in World Cup, six.

After Tendulkar, Kallis’ nine half-centuries are the most by a player in World Cups. Kallis played five World Cups, the first of which was in 1996, in which he tallied just 63 runs across four innings. Three years later, Kallis struck four half-centuries, followed by a dismal show at home in 2003. In 2007, Kallis registered three fifties and one century to amass 485 runs helping South Africa reach the semi-final. His final World Cup, in 2011, was somewhat of a mixed bag with 225 runs coming at an average of over 32 and two half-centuries.

Gibbs played 25 matches for South Africa in the World Cup, managing two centuries and eight fifties, taking his average to 56.15 in cricket s supreme tournament. Making his World Cup debut in 1999, Gibbs cracked a couple of half-centuries to guide South Africa to the semi-final. He scored a couple more in 2003 at home even though his side failed to make it to the Super Sixes. In 2007, as South Africa reached the semi-final again in the Caribbean, Gibbs led the way with four half-centuries, including his feat of six sixes in an over against the Netherlands.

Despite playing four World Cups, all of Sangakkara s half-centuries have spread across two editions. His highest score was an unbeaten 39 during Sri Lanka s road to the semi-final in 2003. Across the next two editions, in the Caribbean and the sub-continent, Sangakkara struck three and four half-centuries, with Sri Lanka reaching the final in both tournaments. In Sangakkara s final World Cup, his fifties tally drew the number zero, because each time he scored a half-century, Sangakkara converted it into a three-digit score four times to be precise.

The most successful World Cup captain, Ponting went without a half-century in seven innings during his Cup debut in 1996 even though he did register a hundred. Three years later, Ponting had to show just one fifty in 10 innings. In was 2003 however, that during his captaincy, Ponting reeled off two centuries and a fifty. With four half-centuries and one hundred, Ponting amassed 539 runs from nine innings in the Caribbean as Australia romped to a World Cup treble. He finished his final World Cup the way he did his first, one century, in 2011. Dream11 Prediction: SL vs SCO Team Best Players to Pick for Today’s Match between Sri Lanka and Scotland at 3:30 PM 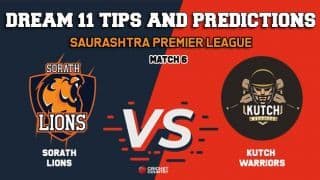 Dream11 Prediction: SL vs KW Team Best Players to Pick for Today’s Match between Sorath Lions and Kutch Warriors in SPL 2019 at 7:30 PM