West Indies' victory over Pakistan will help them gain momentum going into the semi-final.

Darren Sammy and Dwayne Bravo’s brilliant assault against Pakistan’s bowling helped West Indies seal a berth in the semi-final of the ICC World T20 2014. Nishad Pai Vaidya looks back at that partnership and how it promises to blood momentum into the West Indies camp.

To say that Dwayne Bravo and Darren Sammy’s assault in the slog overs was brutal is an understatement. In many ways, it was reminiscent of their ICC World T20 2012 final against Sri Lanka, where they compensated for a slow start with an unmatched assault at the death.  Pakistan bled runs profusely, conceding 59 in the last three overs. Actually, there was that West Indian belief all along that they could put up a good score on the board and defend it. This time around, a semi-final spot was at stake and they found their mojo with some spectacular hitting.

At the post match press conference, Bravo resonated the belief when he stated that it is important to bat the allotted 20 overs and anything is possible. But, they were up against, Saeed Ajmal and Umar Gul, two men who are fine bowlers in Twenty20 (T20) cricket. They had worked in tandem to pull a rabbit out of the hat and beat Australia in a thriller earlier in the tournament. Here, The odds were in Pakistan’s favour with West Indies at 81 for five in the 14th over. What did the West Indies have then? Their belief and self confidence. That is what took them through.

It is great to see Bravo and Sammy come to the party for the West Indies in the last two games. The T20I and the One-Day International (ODI) skipper respectively, stitched a superb partnership at a crucial stage of the innings, exhibiting their craft with the bat. Both have been criticised at various points in the recent past, but in the game against Pakistan, they showed what they are made of. Sammy was perhaps an easy target. However, his hitting ability, backed up by a calm head on his shoulders is working wonders for West Indies now. Against Australia, they faced a stiff challenge in the slog overs and had only one option: attack their way around. But, against Pakistan, it was a different challenge. There was more at stake, plus they had to put up a good score.

Bravo reflected on the partnership during the media interaction and revealed the simple plot, “We had nothing to lose, we were under pressure. I told Sammy not to worry about taking on Ajmal, just stay there, keep your eyes on the ball and be powerful enough to get close to the ball to hit it over the ropes. The idea was to get about 135-140.”  With that carefree approach they not only managed to overhaul that 140 mark, but went past 160.

Watching the duo work their way from the press box was an absolute pleasure. The whole crowd had come to watch Chris Gayle, but were given similar entertainment by this duo. Bravo didn’t try too many things at the crease and let his reflexes take over. There was no shuffling about and he did back that plan of staying still at the crease and maintaining his balance. When Gul came onto bowl the 18th over, he smacked a full length delivery, then a shortish one and carted another wide one behind point. He also waited for Ajmal to make a mistake to attack. Sammy went almost unnoticed, while Bravo fashioned that assault, but was equally effective.

Such a victory is bound to give West Indies the momentum and would bring back memories of that crowning glory of 2012. And guess what? It is Sri Lanka they face next, the team they defeated in the final back then. There are many reasons to smile for the West Indies! This time, they are holding back the Gangnam style though!

(Nishad Pai Vaidya is a Correspondent with CricketCountry and anchor for the site’s YouTube Channel. His Twitter handle is @nishad) 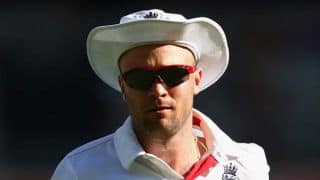 Jonathan Trott struggles to make his mark on comeback