ICC World T20 2014: India's lack of x-factor gives them an outside chance to win big prize

ICC World T20 2014: India's lack of x-factor gives them an outside chance to win big prize

India have struggled to do well in the last three editions of World T20.

India have been tipped as one of the favourites for the ICC World T20 2014 by a few former cricketers. But Shrikant Shankar wonders whether MS Dhoni’s men actually stand any realistic chance to win their second T20 crown.

Michael Vaughan and Wasim Akram have recently said that India are amongst the favourites to win the ICC World T20 2014. They also tipped West Indies and Pakistan as other favourites as well. One could imagine people and ex-cricketers going for West Indies, as they are the defending champions. If all their stars get together and deliver then there is hardly any team that can stop them from defending their crown. To a certain extent Pakistan are also justifiable favourites. Both West Indies and Pakistan possess raw talent necessary in winning a T20 title.

That brings us to India. Do they actually have that raw talent which could come to great use in the shortest format of the game? There is no clear answer and if one tended to get at one then they would say ‘No’. India won the inaugural World T20 in 2007 when nobody had given them any chance. India had a nightmare of a ICC World Cup 2007 that year and MS Dhoni had just been made captain with a young team under his charge. Nobody knew what to expect. And that is another reason why India won the tournament.

India had flair and an X-Factor that seems to have gone now. Gautam Gambhir and Virender Sehwag were as good an opening pair as any in that tournament. Then youngsters like Rohit Sharma and Robin Uthappa were unknown quantities and they were and are exceptional fielders. Yuvraj Singh was in his prime and the bowlers bowled without fear and had a lot of zip. Throw in Dhoni’s new leadership into the mix and India had a side that stunned superior teams on paper one game after the other.

But the same cannot be said about this Indian team. Much of the players are still the same, but there is hardly any X-Factor left. All the players are quite cultured in their game and there is nothing new that can surprise the opposition. One should not forget that only after the 2007 triumph was the Indian Premier League (IPL) created. Ever since its inception, India have hardly impressed in the next three World T20s. One cannot blame the IPL for this, but there might a correlation to the fact that with numerous foreigners playing in the T20 extravaganza, they are used to the Indian players’ games.

India have not exactly evolved despite the number of Twenty20 (T20) matches their players have played. There is no denying that the players are highly talented, but one cannot see them lifting the trophy come April 6. Plus some of their players are terribly out of form and they could be quite tired with many series played lately. The conditions in Bangladesh should suit India with the low bounce and spin on offer. But same was the case in 2012 in Sri Lanka and India did not even make it to the semi-finals.

The approach probably has to change a bit and that could throw off the opposition. In a T20 game, a dominant spell of five overs could well turn the game. Akram and Vaughan might have just named India amongst the favourites, but it remains to be seen whether they can perform well. What might help India this time around is some individual brilliance from a few players. In the last three editions when it has mattered, it didn’t happen. But overall, India have an outside chance to win the big prize. 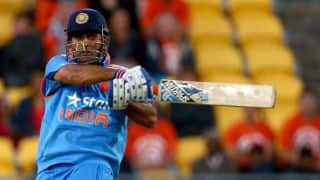