Both the teams have the best spinners of the T20 format in their line-ups.

West Indies and Pakistan clash for a spot in the semi-finals of the ICC World T20 2014 with spin stealing the focus. Nine out of the top ten T20 International bowlers in the world are spinners, five of whom would be in the fray for the game on Tuesday. Nishad Pai Vaidya weighs the spin factor ahead of the big game.

As West Indies and Pakistan clash for a spot in the semi-final, the whole buzz has been about spin. The track at the Sher-e-Bangla National Stadium has been slow and has assisted the spinners very well. With West Indies boasting of the likes of Sunil Narine and Samuel Badree and Pakistan finding a good combination in Saeed Ajmal and Zulfiqar Babar, batsmen from both sides have a huge test before them. In this crucial game, it is but obvious that the spinners will play a crucial role in helping their sides go through to the semi-final of the ICC World T20 2014.

West Indies have fashioned their practice sessions knowing that the Pakistan bowlers will attack them with spin. Against India, the batsmen were strangled by Amit Mishra and Ravichandran Ashwin, as they failed to take the singles and twos. The West Indians have the big-hitters in the side, but skipper Darren Sammy knows that his batsmen have to rotate strike. With that in mind, West Indies practiced in a game scenario, trying to work out their plans against Ajmal and company.

“Whatever approach we come with, we definitely have to rotate the strike. In the game against India, 60 percent of the balls were dots; something we have been working on. Hopefully, we keep rotating strike and keep getting the boundaries in between,” Sammy told the media ahead of the crucial clash. Ajmal and Babar won’t be the only spinners who will test the West Indies, as Shahid Afridi and Mohammad Hafeez can also do some serious damage. That is why the running between the wickets is crucial. They have the big-hitters, but the ball won’t necessarily come on to the bat as well as they like it when they face Pakistan.

An interesting plot through the whole story is the presence of Saqlain Mushtaq in the West Indies camp. The former Pakistan off-spinner is the creator of the doosra, but believes that with all the technology around that aids analysis, the batsmen have a fair idea of what a bowler like Ajmal would do. Surely the West Indian batsmen would have had a word with Saqlain to know more about the Pakistan spinner. “Obviously, when the batsmen come to me, and they want to ask anything about Saeed Ajmal, obviously I have to speak about him, what he does, how he bowls the off-spin or whatever. That is the part of the job. But the thing is, if you see the technology that tells you everything. So, there is nothing hidden,” said Saqlain.

Through all that, Saqlain did point out one important facet. Out of the top 10 bowlers in the T20 International rankings, nine are spinners. Interestingly, the top two belong to West Indies — Narine and Badree. And if you have a closer look at the ranking table, you would find that five out of the top ten bowlers would play the game on Tuesday. Ajmal is placed at No 3, Hafeez is at 6 and Afridi is No 10. That puts into perspective how big a role spin is going to play.

Looking at the records in the recent past, West Indies haven’t played the Pakistani spinners too well. Ajmal averages 18.75 across formats against the West Indies since the ICC World Cup 2011. Hafeez records a figure of 24.37 in the same time period. The last time the two sides met at the Sher-e-Bangla National Stadium was for the quarter-final of the 2011 World Cup. In that game, the Pakistan spinners steam-rolled West Indies into submission. There are many lessons to learn for the West Indies from their past experiences.

It looks like the West Indies seem to have a sane gameplan, but they have to execute it in the centre and not get tied down. And, there would be focus on Narine and Badree as well when they try to tackle the Pakistan batsmen. Saqlain had a good message for Narine and Badree ahead of the clash, “God gave us two eyes, we have to use them properly. With one eye, look at your strength and with the other eye, look at the weakness of the others.” One is quite certain that Pakistan are also doing the same. 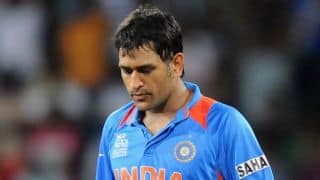