If anything, there has been an improvement, however small, for the seamers.

As the ICC World T20 2014 closes in on the final, a notion has been making the rounds that the tournament has marked the revival of spin (especially leg-spin). The hypothesis is based mostly on the success of the likes of Amit Mishra, Imran Tahir, and Samuel Badree. Abhishek Mukherjee probes deeper to find out whether that is indeed the case.

The fact that Imran Tahir, Samuel Badree, Ravichandran Ashwin, and Amit Mishra reside peacefully in the top six in the list of wicket-takers probably sends out a notion that the ongoing ICC World T20 2014 has marked the rebirth of leg-spin, especially in the shortest version of the sport.

The spinner, of course, is not the most glamorous among bowlers. Instead of emitting fire from their noses, sending stumps cart-wheeling, and intimidating batsmen he chooses a different path: he tosses the ball in the air, he doesn’t really care about giving away runs, he loves luring batsmen, he beats the batsmen in flight and loop, and he takes advantage of the gullible men who think they can easily hit him out of the park.

Let us check how valid the point is:

What is it, then, that set the spinners apart from the others in the tournament? Let us consider the top 25 wicket-takers from each type of bowling, which also brings the cut-off down to five wickets. It is to be noted that the list contains 12 seamers and 13 spinners, which is not a substantial difference.

Do note that there is a significant seam-spin difference in average and economy rate among the top bowlers. For the rest, however, seamers have done just as well as spinners.

This only means one thing: there have been some spinners who have done exceptionally throughout the tournament, but it can hardly be called a “revival of spin bowling”. These bowlers have sent down only 36% of the total balls bowled: the remaining 64%, on the other hand, have actually fared worse than their seam counterparts.

In other words, there may have been a few stars, but generally seamers have done a job as good as the spinners.

The other myth that has been doing the rounds is the notion that the tournament has marked the revival of “the lost art of leg-spin”. How much truth is there in the statement? Let us find out. Since off-break and leg-break data is not available for all bowlers, let us consider these spinners (who have taken five or more wickets in the tournament):

There is not much to choose from between the top three off-spinners and the top three leg-spinners. The leg-spinners have picked up more wickets, while the off-spinners have conceded less runs. Do note that of the 13 bowlers who have picked up over five wickets in the tournament, seven are left-arm orthodox spinners, which makes the comparison with the other two groups somewhat unfair. If we consider the top five bowlers from each style (sorted by wickets, then economy rate), the numbers do not look significantly different.

Not much to choose from there. The tournament, thus, has not really revived leg-spin: it has revived all styles of spin (which is partially true) to the same extent. In other words, there has been nothing special about leg-spin in the tournament. 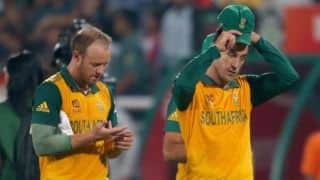