ICC World T20 2014 has proved that leg spin is still a relevant art.

Wrist spinners are among top wicket-takers in the ICC World T20 2014 and have showed they still have role to play. Realms of pages have been written on how the art of leg spin is dying and that modern day cricket doesn’t give it much of a lifeline given the aggressive mindset of batsmen and high quality bats. However, in the ongoing World T20, the leggies have proved that their ilk remain relevant.

In this championship, the wrist spinners are the leading wicket-takers and have been instrumental in their side’s brilliant performances. The spinners have been economical, which is the most important aspect of this format.

And mind you, they haven’t forgotten to flight the ball or are merely bowling flat on these helpful wickets of Bangladesh. Instead they are varying the pace on the slow turners and going for wickets as much as possible with their variations.

South Africa‘s leg-spinner, Imran Tahir leads the way with 11 wickets followed by Samuel Badree of West Indies with 10 (before semifinals) and Amit Mishra from India with nine wickets are in the top five of the wicket-takers list.

Take the example of Mishra. Before this tournament, he did not enjoy the confidence of his skipper Mahendra Singh Dhoni despite doing well in the limited opportunities he got. Things changed for him after Asia Cup in Bangladesh. He stuck to the basics — using variations, varying pace and was not afraid to flight the ball, which drew the batsmen out earning him a couple of stumpings.

And it is no surprise that Mishra now enjoys his captain’s confidence and that helps him to go for wickets so much so that he is now the go-to man for Dhoni.

“In shorter format if you think of stopping runs, you cannot do it. You always must think about taking wickets, how to take the wickets and keep the pressure on the opponents. This is working for me,” said Mishra after his man of the match performances against Pakistan.

Even Australia’s leggie James Muirhead did a decent job in the limited opportunity. The 20-year-old picked up two wickets in two games against India and West Indies, but he was impressive despite his inexperience against the sides that played spin well.

West Indies bowling coach and Pakistan great Saqlain Mushtaq said that there has been change in the mindset of spinners. “Probably mentality of the spinners has changed. Earlier, spinners would come with a different mindset and now it’s different. Tactics are changing. Sub–continental wickets help spinners that’s also a reason. Batsmen do not have the same kind of courage against spinners which they earlier used to have,” said the legendary off-spinner. 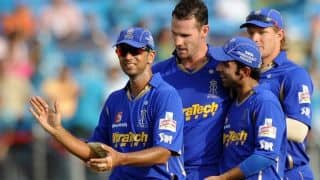