Ahead of the India-Pakistan encounter in ICC World T20 2016, take a look at the previous four meets between the two sides in the tournament.

Less than a month back, India and Pakistan clashed in a T20I in the Asia Cup. In the end, India chased down the modest 84 with five wickets in hand but Pakistan had India reeling at 8 for 3 at one stage. That is what India-Pakistan cricket matches present. The intensity is high and no team likes to lose. As far as T20 format is concerned, Pakistan have beaten India only once in the seven times they have played against each other, out of which, four times they have played in ICC World T20 and Pakistan have not won a single game. LIVE CRICKET SCORECARD: India vs Pakistan, ICC T20 World Cup 2016, Match 19 at Kolkata

Ahead of the India-Pakistan encounter in the ICC World T20 2016 at Eden Gardens in Kolkata, Suvajit Mustafi looks at the previous four meets between these two sides in the tournament.

1.  ICC World T20 2007, Group Match at Durban: A packed Kingmead witnessed a classic. Seniors like Sachin Tendulkar, Sourav Ganguly and Rahul Dravid had pulled out from the tournament citing T20 cricket was a young man’s game. MS Dhoni was appointed the skipper and not many gave the new-look young India side a chance.

Pakistan had put India in, and had them 36 for 4 in the seventh over. The destructor-in-chief was Mohammad Asif, who picked up 4 for 18 as India only managed 141. Robin Uthappa’s 50 was India’s saving grace. Indian bowlers rose to the occasion and after 15 overs, Pakistan were 87 for 5. Misbah-ul-Haq fought a lone-handed battle and Pakistan needed 12 from the final over.

Sreesanth was the bowler and the over went: 1,4,2,4. Misbah brought up his fifty in the process and when Pakistan needed just a run from two balls, Misbah got beaten off the fifth ball and run out trying to steal a single in the final ball. It was a tie.

The format ‘s rule does not allow points to be shared and hence the teams contested in a bowl-out. Virender Sehwag, Harbhajan Singh and Uthappa hit the stumps. While Pakistanis, who possessed one of the best bowling attacks in the competition missed did not hit the stumps even once. Yasir Arafat, Umar Gul and Shahid Afridi, all missed the stumps. India had won and there is a reason, Sehwag calls this game as his best India-Pakistan T20 contest.

2.  ICC World T20 2007, Final at Johannesburg: The inaugural edition of the World T20 could not have seen a better finish. It was India vs Pakistan in a world event final and the game was set to be the most watched encounter. India chose to bat this time and Gautam Gambhir (75) starred with the bat to take India to 157. At the half-time, India were not sure if the total was enough as the Wanderers track is quite renowned for being a batting paradise.

Imran Nazir ensured that the track lived up to its reputation as he breezed to 33 from just 14 balls before he was run out. Just when it seemed that Pakistan had their run rate sorted, Indian bowlers came to the party. Once again, a Misbah classic got Pakistan close to a win. With 54 needed from four overs, Misbah tonked Harbhajan for three sixes in an over and by the time it was an over remaining, Pakistan needed 13 and had a wicket in hand. Dhoni pulled up a surprise when he handed the ball to Joginder Sharma. The over went: wide, 0,6 and Misbah had got it down to six from four balls.

What followed is an act that Misbah will regret forever. He could have hit that anywhere in the park but he chose to scoop. As the ball sailed in the hair, millions around the world had their heart in their mouth. Sreesanth at short-fine leg was under it and he pouched it comfortably. India had won the inaugural World T20 and there began Dhoni’s legacy as a leader. And instantly, the format’s popularity soared. ALSO READ: Life comes a circle for India at ‘diabolical’ Nagpur against New Zealand in T20 World Cup 2016

Pakistan chose to bat and were restricted to 128. They found it tough against the Indian bowling and it was only Shoaib Malik’s 22-ball 28 that gave the total some respectability. Pakistan rested their hopes on Saeed Ajmal but India’s master of chase, Virat Kohli made it look very easy.

4.  ICC World T20 2014, Super 8 Match at Dhaka : After the World T20 2012 edition, Pakistan toured India and played two T20Is. The series was tied 1-1. Pakistan had brought up their first T20I win against India in that series and when they met at Dhaka for the next game, they were hopeful that they could repeat that. Dhoni put Pakistan in and Indian bowlers put up a solid show. The spinners in particular collaborated and restricted Pakistan to 130.

It seemed like the repeat of 2012 clash. Indian batsmen once again made the chase look easy as they cruised to a seven-wicket win. Indians had an incredible run in the series as they enjoyed an unbeaten run till the final. 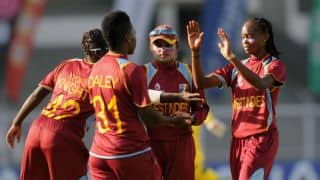