His four wickets in U19 final against Australia set the tone for a famous Indian victory. Sandeep Sharma said he hasnâ t heard about his bowling style being compared to that of Praveen Kumarâ s and he is focused only on his bowling. © Getty Images

His four wickets in the Under-19 final against Australia set the tone for a famous Indian victory. Sandeep Sharma, who shook many batsmen’s defenses in the just-concluded Under-19 World Cup speaks  in an exclusive interview to CricketCountry.
Excerpts from an interview:

CricketCountry (CC): It has been almost a week since the World Cup triumph. Has the victory sunk in?

Sandeep Sharma (SS): It’s slowly sinking in. We never expected to receive such adulation from fans when we returned home. It has been great experience.

CC: Unmukt Chand played a memorable knock in the final of the World Cup. How will you rate his innings in the final against Australia?

Sandeep: It was a tremendous innings under pressure. He had opened the innings in the final and played an excellent knock. Even Smit Patel played a crucial knock in the middle-order. We were struggling at 100 for the loss of four wickets. But we knew till the time Unmukt is on crease, we still have a chance to win. He showed maturity till the end and saw us home.

Sandeep: Unmukt is an open-minded captain. He is very accessible to everyone. The good thing about him is that he takes suggestions from everyone and gives the freedom to players to opine. As a captain, he assesses the match situation and doesn’t crumble under pressure. Moreover, he never projects himself as a captain; he is more of a friend. We enjoy his company.

CC: You had to chase 225 runs in the final, which was a challenging total. Did the pressure of final affect the team while chasing?

Sandeep: Well, from the beginning, we never looked at that game as a final. We entered the field assuming it is just another game. Our coach, before the game, told us to just relax, enjoy the game and throw your body around. He told us that this moment will not come again in our lives and after the final was won, we realised how huge it was. So the trick was to play a natural game, even in the final as the pressure was more on defending champions, Australia, who were playing at home.

CC: India-Pakistan rivalry is considered to be very intense, be it senior team or juniors. How did you prepare yourself for the tense clash?

Sandeep: There was no special preparation for this game. We took this game as a normal match and tried to enjoy the occasion. We also knew it will be our last match against this Pakistan team. So, we told ourselves to enjoy the match and not worry about the outcome.

CC: How was the feeling to finish with the figures of three wickets conceding just 24 runs against the arch-rivals in the quarter-finals?

Sandeep: We have played Pakistan earlier. So, we were aware of their weaknesses. Their top order batsmen love driving the ball, which is difficult in Australia. So, we just tried to ball full-length, which worked for us. We reaped the rewards of pitching the ball up and allow the ball to do the rest.

CC: You were the last batsman to walk in during the tense match in the quarter-final against Pakistan as India needed only ten runs to win. You did not give away your wicket and remained unbeaten on two runs off 22 balls as India got home. Was the occasion nerve-wracking for you?

Sandeep: Yes, there was a bit of pressure. But, when I went in to bat, I was not thinking of the score. As we slowly moved towards our target by accumulating singles, the pressure kept mounting on Pakistan, and they finally crumbled under pressure.

CC: You got rid of Jimmy Peirson and Cameron Bancroft – who was one of the top scorers for Australia in the tournament – in your first two successive overs of the final which set the tone for India. Was there a special plan in store for the two openers?

Sandeep: The strategy against the Australian top-order was the same as it was against Pakistan. Just pitch the ball up and expect the batsman commit error, which happened. The plan worked for us, again.

CC: Is it true you initially planned to become a batsman later to be convinced by your coach to pursue bowling?

Sandeep: Yes, initially I was a good batsman. In fact, I was a good all-rounder. Then, my coach, Munish Bali, suggested to me that my innate strength lies in swing bowling and that it would augur well for my career if I sharpen my bowling skills.

CC:  Winning a World Cup is a great stepping-stone for a youngster. How do you plan your career from here?

Sandeep: My next big assignment will be Ranji Trophy. I will be preparing myself for the upcoming season for my team Punjab.

CC: Do you think you can earn India cap soon?

Sandeep: Not really. I am thinking only of my Ranji Trophy assignment. I am not thinking too far as I want to go step by step. If I do well in domestic cricket, I am sure the selectors will take notice.

CC: Your in-swingers have proven to be potent. Is it your natural delivery or have you put in special effort in the nets to develop this delivery?

Sandeep: Basically, my strength used to be out-swinging deliveries. I used in-swing deliveries only as a surprise delivery. But my coach told me that, my bowling was becoming too predictable. Also, I had a change in my bowling action, which forced me to develop an in-swinger that ultimately led to change in my overall bowling style. Now, the in-swing ball is my natural delivery while out-swing is my surprise delivery.

CC: You are one of the few cricketers to have played in two World Cups. India’s previous World Cup in New Zealand was not a great campaign. What were the lessons learnt from 2010?

Sandeep: In 2010, we didn’t have much idea about the conditions that we were about to encounter in New Zealand. But this time, we were well prepared as coming into the tournament we had played a quadrangular series in Australia which helped in gauging the local conditions. Also, we had played a few tournaments against almost all top nations like England and South Africa which was of immense help ahead of the tournament. So, compared to last World Cup, we were better prepared in this world cup.

CC: Munish Bali, who was a part of support staff in India Under-19 team’s successful World Cup campaign in 2008, is your coach. How vital are his inputs?

CC: Who are your childhood cricketing heroes?

Sandeep: Rahul Dravid. I have always admired his passion, commitment for the game and team. His sincerity and preparations for a game remains unmatched.

CC: Have you had the opportunity to meet him. Did you ask him for any tips?

Sandeep: Yes, I had the opportunity to meet him many times at the National Cricket Academy in Bangalore. I never asked for any cricketing tips, but he always tells us to stay humble, grounded to earth, and also to respect the game as the game will always remains above everyone else, no matter how big a cricketer is.

CC: Looking at your ability to swing the ball both ways, media has already started drawing comparisons between you and Test cricketer Praveen Kumar. Can you relate bowling style with that of his?

Sandeep: I have never heard of that comparison by the media. I never really focused on modeling on someone else’s bowling style. I want to focus only on my craft as my thinking as a bowler is different from that of other cricketers.

CC: Who is your favourite fast bowler in international cricket?

Sandeep: My favourite bowler is James Anderson. I admire the way he swings the ball both ways.

CC: Most of the Indian fast bowlers arrive with a bang at the top level but soon lose their zeal. How will you ensure longevity as a fast bowler?

Sandeep: India Under-19 coach Bharat Arun has already spoken to me in this regard. His only suggestion has been never be satisfied with your achievements and that we should keep on striving for more. Because when you become satisfied, you stop working hard. He emphasises that we should enjoy our job for the day when we stop enjoying, we will lose our interest.

CC: Who are your mentors?

Sandeep: My mentors are Bharat Arun and Munish Bali. Both have had great impact on my cricketing career so far.

CC: Winning a World Cup is a special moment. How did the boys celebrate the occasion after the triumph?

Sandeep: We celebrated in an effusive manner. We sang and danced, inside dressing room, even outside the hotel, where we were joined by Indian fans, who joined our revelry. Our captain Unmukt told the Mayor of Townsville that she should forgive us if we create a bit of nuisance that night during our celebrations. It was a great moment. 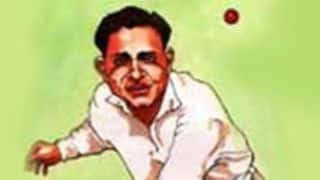