Imran Khan (6-14) bundles out India for 125, but Pakistan blown away for 87 in a sensational thriller

Imran Khan (6-14) bundles out India for 125, but Pakistan blown away for 87 in a sensational thriller

Imran Khan took 6 for 14, but could not prevent India from winning a sensational thriller.

India s pride as World Champions was dented severely following the humiliation at home against West Indies and England. It took them time, but they bounced back under Sunil Gavaskar with the triumph in the 1984-85 World Series Cup that followed before moving on to Sharjah for the Rothmans Four-Nations Cup. Abhishek Mukherjee looks at March 22, 1985 the day that provided one of the most stunning matches in the history of ODIs.

The 1983 World Cup was an unprecedented high for India. The home series against West Indies brought them down to earth, and the one against England next season sunk them to the nether-lands. Just when it seemed that they would be sinking lower, they turned around at the World Series in 1984-85. Not only did they win the trophy, they won all 5 matches, and barring Pakistan in the final [who lost 9 wickets], they bowled out every other team: it was that emphatic.

India had trounced Pakistan, Australia, England and New Zealand on their way to the championship. Following the tournament, the first three moved to Sharjah to join India for the Rothmans Four-Nations Cup. The format was simple: the traditional rivals [India and Pakistan, Australia and England] would take on each other in what would potentially be semi-finals ; these would be followed by a third-place decider and a final.

The opening match of the tournament turned out to be one of the greatest in the annals of limited-overs cricket. While India were on the lookout to stamp their authority on their arch rivals with their third victory in a week, Pakistan were keen on bouncing back and no one was as desperate to get back at India than Imran Khan, their nemesis from two seasons back.

He was fast; he was fuming; his nostrils were flaring; he was breathing fire; he ran in with blood in his eyes and fire in his belly; he tore into the Indians; and down went the wickets, one by one, like ninepins, against the some quality pace, bounce and swing from Imran Khan.

On flat tracks he was a threat; with some help from the conditions he was next to unplayable; the Indians were up against an irresistible force arguably the greatest in the world in 1985 despite the presence of the ruthless West Indian fast bowlers and the mean, brutal Richard Hadlee.

Srikkanth was not expected to last long: Imran unleashed a vicious that hurried on to him; the attempted hook went high up in the air, and was taken safely by Saleem Malik at square-leg. It still did not matter; it was not supposed to; India batted very deep, and there was no need to panic. Yet.

Dilip Vengsarkar tried to leg-glance one that slanted across him and the resultant edge went to Ashraf Ali down the leg-side; Sunil Gavaskar, having stood down as Indian captain just before the tournament, played a flashy stroke away from his body and edged it to Ashraf; and Mohinder Amarnath, the man who had handled Imran comfortably two seasons back, could not handle a lethal in-swinger as the ball hit the stumps. India, on paper the best ODI side in the world, were reduced to 34 for 5, with Imran accounting for every wicket to have fallen.

Gavaskar later wrote in One-Day Wonders: It was a devastating spell of fast, swing bowling and if there were any doubters in the world about Imran Khan s ability to bowl fast after his long lay-off they must have been clearly convinced that he was literally bouncing and fit.

The decisive partnership and the mop-up

Mohammad Azharuddin, of course, was there, and was in the form of his life since he had arrived on the international scenario with three Test hundreds on the trot. So mesmerised was Allan Lamb by his skills that he commented: Cricket is like f***ing to him. Just go out and do it.

He was joined by Kapil Dev India s best bet when it came to counter-attacking. He had done it against New Zealand in the World Series Cup semi-final; this time he strode out with a purpose yet again, and realising that there was no point in hanging around, did what he did best: play his strokes.

Azhar hung on with an uncharacteristically dour show, while Kapil made a brisk 44-ball 30 with 4 fours before Tauseef Ahmed ran through his defence. The sixth wicket had added 46; little did they realise that they had done enough. Binny hung around to add some crucial runs, as did Madan Lal, who chased one and was snapped up by a flying Ashraf.

Tauseef bowled Azhar 3 short of a well-deserved fifty before Wasim Akram ended things quickly. India were bowled out for 125. It would take a world record for them to win the match: the lowest total defended till then was by West Indies at Kingstown in 1980-81, when they had scored 127 but managed to bowl out England for 125. However, they had in their ranks Colin Croft [who took six for 25], supported by the small matter of Andy Roberts, Michael Holding and Joel Garner.

Imran registered figures of 10-2-14-6, then the best figures by a Pakistani and the joint second-best [with Gary Gilmour] in the world [after Winston Davis 7 for 51]. He ended up being the Man of the Match. That could well have been the end of the story, but it was not.

Like all Fridays, it was a holiday in UAE. There was a one-hour lunch break for the pious to celebrate Jumu ah. The Indians had already been dismissed close to half an hour early, which meant that there was a 90-minute break. The Indians had a quick meal, went to the dressing-room, and fell asleep shortly afterwards.

Kapil later recollected in By God s Decree: At lunch everyone was congratulating the Pakistanis The lunch break was the most astonishing I have ever encountered. No one wanted to eat. As if on command every member lay down and went to sleep. Yes, it sounds funny but that s just what happened.

They woke up, one by one, after an hour. There were still 20 minutes left for them to take field. It was then that Kapil motivated the men with the words: C mon, let s make them fight for each run. The team left the dressing-room well-charged up despite their batting debacle.

Gavaskar later wrote: I firmly believe that our snooze helped us considerably. Not only did we wake up feeling refreshed and thinking our dismissal was a bad dream but we were saved of the brooding and worrying had we been awake.

Mohsin Khan and [rather surprisingly] Mudassar Nazar started in a breeze before the former hit one to Amarnath at cover and ran; and ran; and kept running back to the pavilion as Mohinder brought the stumps down with a direct hit. It may have opened the floodgates for India, but Mudassar and Rameez Raja settled things, and at 35 for one everything seemed to be going fine for Pakistan.

Till then Binny had been bowling all over the place; the ball that got him out was a simple one outside off, he poked at it, and Gavaskar completed the rest at first slip. Kapil introduced Shastri early, and one of his balls bounced dangerously, took Miandad s outside edge, and Gavaskar had his second catch.

Miandad surprised everyone by promoting Ashraf, who struggled against Laxman Sivaramakrishnan before playing it to the left of silly-point. Unfortunately, the man at silly-point was Vengsarkar, who flew to his left to come up with a spectacular catch. Imran walked out, played the first ball, and attempted an almighty heave off Siva: Sadanand Viswanath removed the bails off in a jiffy.

India had been 34 for 5 earlier in the day, but they managed to reduce Pakistan to 41 for 5. The small target of 126 suddenly seemed imposing. The Indian fielding reached unreal heights at this stage. The fielders sacrificed body and limb and were prepared to make the Pakistanis fight for every run, wrote Kapil Dev much later.

Rameez and Malik put up a desperate fight, adding a precious 33 for the sixth stand. They ran hard, hit a four every now and then, and slowly piled up the runs. Eventually Malik tried to cut one from Shastri that bounced a bit too much, and Gavaskar took his third catch at slip.

Manzoor Elahi [hailed by some, rather erroneously, as the next Imran] crawled along, but Kapil brought himself back, and inflicted the big blow: Rameez edged one, and Gavaskar pouched his fourth catch of the match [still the second-best after Jonty Rhodes five, though there have are many others on four]. Gavaskar was an inspiration with his four catches, Kapil later wrote.

The end came rapidly: Tahir Naqqash was caught behind off Kapil, and Elahi hit one back to Madan Lal, who was rightly rewarded for his pinpoint accuracy. Kapil finished things off by clean bowling Tauseef, and Pakistan were bowled out for 87 with over 17 overs to go.

India created a new world record by defending 125. It remained a world record till they defended 105 against Bangladesh in 2014. It was perhaps a coincidence that the Binnys father and son were members of the winning sides. Unfortunately, Imran ended up on the losing side despite his blitz: they still remain the best ODI figures by anyone on the losing side.

The Indians rushed back to the dressing-room to find Ramakant Desai, the 46-year old Indian manager, laughing and shaking his head uncontrollably. The Pakistanis went quiet, but Miandad, in an exemplary display of sportsmanship something that is now a thing of the past defied the agony and visited the Indian dressing-room to congratulate the triumphant side, as did Imran.

Despite fiercely fought contests and on-field animosities, they were, after all, good friends, and more importantly they played cricket.

– Australia won the other semi-final of the tournament in a humdinger: they scraped through by two wickets off the last ball of the match, thanks to some frantic running from Steve Rixon and Ryan McCurdy.

– The Indian bowlers and fielders were back at their best in the final in Australia, bowling them out for a measly 139. They lost a few quick wickets, but another Azhar blitz, followed by a 57-run partnership between Vengsarkar and Gavaskar, left India to the brink of victory before Amarnath provided with the finishing touches. India were back at the helm as the top ODI side.

Man of the Match: Imran Khan. 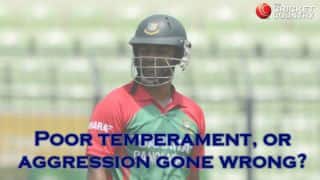 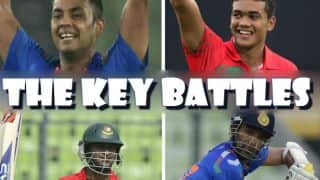