The 32-year-old batsman has let himself down by reckless batting.

Imran Nazir, born on December 16, 1981 is a gifted stroke-maker from Pakistan who has the ability to soar dizzying heights on his day. But over the years, the 32-year-old batsman has let himself down by  reckless batting. Bharath Ramaraj has more….

When the 18-year-old prodigy, Imran Nazir burst onto the scene with a sparkling half-century against Sri Lanka in the Asian Test Championship in 1999, it seemed like Pakistan had found a rare unpolished gem about to blossom and take the cricketing world by storm. In fact, those rapier-like cuts and pulls against Sri Lankan seamers were shots of the highest class.

However, as Nazir turns 32 on December 16, 2013, his career records just don’t do justice to his true potential. He has been found wanting many times for lack of execution of his shots. It showcases that batting isn’t just about being bestowed with God-gifted talent and essaying glorious shots. It also depends on instinctively making the right judgment to play the right kind of defensive or attacking shot.

It isn’t like after making a sparkling half-century on his debut, Nazir has never delivered the goods for Pakistan. In  2000, he took on the ageing warhorses Curtly Ambrose and Courtney Walsh to register his first Test hundred at Bridgetown, Barbados. The track at Barbados had flattened out a bit in the second innings. However, any century scored against the likes of Ambrose and Walsh would be etched in a  batsman’s mind forever. A few months later, in a tri-nation One-Day International (ODI) series in Sri Lanka, his blitzkrieg almost took the game away from a fine South African line-up, before he yet again threw his wicket away by getting cleaned up by Lance Klusener.

Nazir followed up that swashbuckling century against the West Indies with another thrill-a-minute knock against New Zealand in a Test match at Lahore in 2002. New Zealand had fielded a depleted bowling line-up, as several of their key bowlers including Shane Bond and Chris Cairns were down with injuries. But all the credit has to go to Nazir for the way he dismantled the Kiwi attack with consummate mastery.

Since that century against New Zealand, he has been struggling to make a mark in the international circuit. It has to be said that Pakistan’ bizarre selection policies haven’t helped his cause,  and the times he has played for them, Nazir has paid a heavy price for reckless batting. Even if one  is a fine stroke-maker with a  penchant for attacking strokes,  the essence of a fine batsman lies in spending  a little bit of time at the crease before opening up.

Even when Nazir blasted his way to an eye-catching innings of 160 in 2007 against a  hapless Zimbabwean line-up, it never felt like he was trying to build an innings.

In the Twenty20 (T20) format  Nazir was expected to fire on all cylinders, but there too he has struggled to make it count. In the ICC World T20 held last year in the Emerald Isles’ he wafted and walloped his way to 72 of a mere 36 balls against Bangladesh. But such performances have been few and far between.

Days have turned into months and months into years, but the art of building an innings just doesn’t seem to have been ingrained in his batsmanship. Back in 2007, the right-handed batsman admitted that he needs to be more careful.  Times of India quoted Nazir as saying, “I am now trying to be careful with my shot selection and trying to mentally prepare myself to get over the reckless approach as it doesn’t pay in the long run.” Unfortunately, he doesn’t seem to have put those words into practice.

Time is running out quickly for Imran Nazir to make an impact in the international arena. To sum it up,  he needs to stop playing for the galleries and stick to the old adage of playing each ball on its merit. 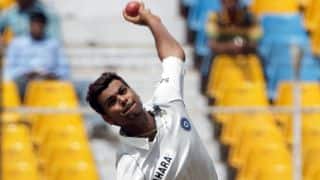