Robert Burrows bowled Bill Huddleston in a county game, and the bail flew 67 yards 6 inches. Curiously, across the next 18 years, two similar incidents took place in another corner of the world which bound the three together in a curious thread of coincidences.

June 29, 1911. Robert Burrows bowled Bill Huddleston in a county game, and the bail flew 67 yards 6 inches. Curiously, across the next 18 years, two similar incidents took place in another corner of the world which bound the three together in a curious thread of coincidences. Arunabha Sengupta remembers the day and the events that followed.

Coming in at No 4, Bill Huddleston scored 55 in the Lancashire innings. This was more than Test stalwarts of the stature of Harry Makepeace and John Tyldesley managed. When Worcestershire batted, Huddleston ran in with his medium-pacers and knocked over 6 wickets for 58 runs. As the visitors followed on, he scalped two more in an innings win.

In spite of the performance, which would have been termed Bothamesque had it taken place 70 years down the line, Huddleston’s contribution in the match has gone down in history in a completely different context.

Opening the bowling for Worcestershire was 40-year-old Robert Burrows, a pillar of Worcestershire CCC. He had been for many seasons the leading light of the team’s bowling attack. With time, he had also matured into a good enough batsman to be called an all-rounder.

Burrows bowled well enough in the Lancashire innings, picking up 3 for 89, but his incredible feat on that day had to be recorded beyond the scorecard. It was Burrows who dismissed Huddleston, hitting his stumps and sending the bails flying. This is no imagery of idiomatic pretensions, as the bails did indeed fly — across a whopping distance of 67 yards 6 inches! As the game was halted to measure the remarkable distance, it went down as a First-Class record!

Burrows was in prime form when cricket had to grind to a halt in 1914 because of the First World War. In July, weeks before the interruption, he scored 107 against Gloucestershire. He was still around to play for a season when the game restarted in 1919.

Even after moving away as a player, he returned to the First-Class scene in more weighty capacity. In 1923, Burrows was appointed a First-Class umpire and served for nine seasons. His heavy form could be seen on county grounds, crouching with concentration behind the wicket. He stood in one solitary Test match, alongside the legendary Frank Chester in the 1925 Ashes encounter in Nottingham. The match was washed out by rain after just 17.2 overs of a Jack Hobbs and Herbert Sutcliffe association.

In the last Test of the series, a Nottinghamshire miner went on to play a leading role in winning the Ashes for England. Combining with the veteran Wilfred Rhodes, Harold Larwood bowled England to victory in the final Test at The Oval.

Three and a half years after this Test match, Larwood equalled Burrows’ record during the tour of Australia with Percy Chapman’s side in 1928-29 — the series that saw the debut of Don Bradman. In the tour match against Tasmania, Larwood bowled Geoffrey Martin and the bail again flew exactly 67 yards 6 inches.

However, in the intervening years between the two incidents of flying bails, there took place a remarkable coincidence along the same lines. In a curious quirk of chance, the odds of which are infinitesimally small, the event took place in November 1925, although not in a First-Class match.

During an encounter between New Town and North West Hobart, a batsman of the latter team was bowled by an express delivery that sent the bail hurtling across a distance of 83 yards one foot and nine inches.  And the name of the bowler was Arthur Burrows! This all-rounder played 31 First-Class matches for Tasmania between 1923 and 1937.

Although this does not go down as a First-Class record, the travelling bails, the identical last names and the Tasmanian connection together produce an almost supernatural confluence.

The 1925 incident, however, cannot be doubted. Six different men vouched for it and it included the weighty statement of Joe Darling, the former Australian captain. 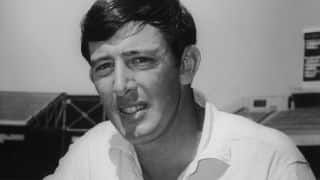