Vijay Bharadwaj and Hemlata Kala are the only Indian cricketers born on Independence day.

R Vijay Bharadwaj and Hemlata Kala are the only Indian cricketers who were born on August 15, Independence Day. Bharadwaj was an all-rounder who represented India in the late 1990s and early 2000s, while Hemlata played for the India Women from 1999 to 2008. Nishad Pai Vaidya looks back at their careers on the occasion of Independence Day.

India celebrates 67 years of Independence on August 15, 2014. Miles away, in England, its cricket team would take on the hosts in the fifth and final Test at The Oval. It is only the fourth time India will play an international on its Independence Day, though one did come during the British times. It may surprise many that India have played only three games on the day through history. But, it is also fascinating that only two cricketers, who have represented India at the highest level were born on Independence Day. Former India all-rounder R Vijay Bharadwaj and woman cricketer Hemlata Kala were born on the day.

Born on August 15, 1975, Bharadwaj came into the Indian team after some good performances in domestic cricket. The right-handed batsman and an off-spinner, Bharadwaj’s career started off in style when he took 10 wickets and scored a few crucial runs in a tri-nation tournament against South Africa and Kenya at Nairobi in 1999. Though India lost in the final, Bharadwaj was awarded the Man of the Series for his efforts. Bharadwaj continued to play a crucial role for India in the home One-Day International (ODI) series against New Zealand in 1999. He made his Test debut against New Zealand at Mohali and also featured in the white flannels on the tough tour to Australia. Bharadwaj found himself out of the side thereafter and only returned for a solitary ODI against Zimbabwe in 2002. However, he was run-out for nought in an attempt to give strike to the set Dinesh Mongia. He did take the wicket of Stuart Carlisle later, but his four overs cost 32 runs.

Bharadwaj had a promising start to his career, but he could not build on that potential. In domestic cricket, he served Karnataka from 1994 for 2005. After retirement, he has moved into coaching.

Born on August 15, 1975, Hemlata was a batswoman who served India from 1999 to 2008. She played seven Tests, 78 ODIs and one T20 International. The fact that she ended with a 50-plus Test average speaks volumes of her ability. Having made her Test debut in 1999, she scored a ton in her second game against England Women at Lucknow in 2002. She followed that up with scores of 64 and 62 in her next Two Tests and then scored her second ton against New Zealand Women at Vapi in 2003. She played in the 2006 Taunton Test, which was India’s last before the ongoing game.

In ODIs, Hemlata wasn’t as successful and averaged only 20.87. In 78 ODIs, she scored only three fifties. She was also a part of the Indian side that qualified for the final of the 2005 Women’s World Cup. Her last game was an ODI against England Women in 2008. 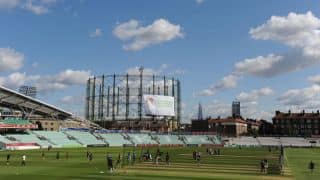 India tour of England 2014: Numbers at The Oval