India avoid media ahead of ICC World T20 2014: Were they evading tough questions?

India avoid media ahead of ICC World T20 2014: Were they evading tough questions?

MS Dhoni and his men left for Bangladesh without facing the media.

MS Dhoni and Duncan Fletcher avoided the media as the Indian team left for Bangladesh for the ICC World T20 2014. Abhijit Banare digs deep into the reasons for such a decision.

March 15, 2013: The Board of Control for Cricket in India’s (BCCI) Working Committee discussed Duncan Fletcher’s fate as coach of the Indian team. And without much justification or any statement, N Srinivasan, the president, announced that Zimbabwean’s contract had been extended by another year. And almost exactly a year later, Fletcher and the Indian team left for Bangladesh without the customary pre-departure press-conference. In the past one week Fletcher, the often unheard member of the Indian setup, made the headlines thanks to Sunil Gavaskar. The Indian legend, who is now a well known commentator, lashed out at the coach for India’s poor results in his tenure. In such a situation, Fletcher couldn’t have avoided the uneasy questions about India’s struggle under his watch.

Since December 2012, India have been appalling, some of the players have failed consistently. How does one expect the media the media to ignore it? Evading tough questions is no way of avoiding for you have to contend with them on the field. If a 0-5 Ashes losing captain faced the media, there was no why the Indian team had to avoid it before the World T20.

Was  poor performance the only reason to avoid a press conference?

While we talk of Fletcher’s low profile, the BCCI’s real headache lies in the ‘mystery envelope.’ As the original date (March 7, 2014) for opening that envelope (submitted by the Mudgal Committee) by the Supreme Court drew close, rumours flew thick and fast about the complicity of at least two prominent Indian players in the fixing saga. It’s only natural that the media would ask uncomfortable questions. The official press conference before Team Indian embarked on their campaign at the World T20 would never have been limited to questions on championship. This is not the first time the BCCI has stonewalled the media with silence. And it’s unlikely that it would be the last in the near future. Before India left for the ICC Champions Trophy last year, the media manager was quick to brush aside the questions over spot-fixing in the Indian Premier League (IPL). Skipper MS Dhoni kept mum!

With all that has transpired over the recent past, the board has ‘done well’ to systematically push a lid on an overflowing jar of muck. And according to the ICC press release, the captain will have to face the media in Bangladesh. Dhoni is slated to address the media on March 14 upon arrival in Dhaka. Surely, the media would be tempted to ask questions other than those related to the tournament.

According to a report by NDTV, the Indian players are forbidden from speaking to the media 40 days prior and after a series. Of course, this does not include the press conferences that take place during the tours. Considering India’s busy schedule, this is nothing but a joke. In a way, it means that the media are not supposed to access the players at all.

It’s hard to fathom the pattern of communication adopted by the Indian cricket board. Their behaviour and statements in no way indicates any responsibility towards the fans and media in a cricket crazy nation. In the eye of all the controversies, not speaking to the media only antagonises people. The fixing issue in particular is extremely sensitive and any statement at this time could let loose a lot of things. While the board was used to working behind closed doors, the pile up of sticky controversies has forced them to take extra precaution. With cricket being such a popular sport, the board need not worry about making the media unhappy.

If the board had maintained a healthy professional relation with the media, it wouldn’t have reached this stage. Ravi Shastri admitted at the Dilip Sardesai memorial lecture in 2013 that the BCCI needs a good PR arm. And in all likelihood, they surely need a good one with March 25 approaching soon where they won’t be able to run away from any questions. 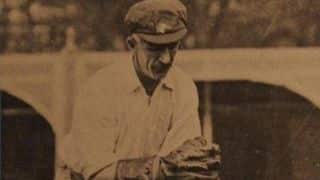 Sammy Carter: Undertaker, wicketkeeper and inventor of the ‘scoop’