India were taken aback by the boos and the jeers from the crowd, that too after winning the 1983 World Cup.

October 13, 1983. Taking field on the first international match at Sher-i-Kashmir Stadium, Srinagar, the Indians faced unexpected hostility from the crowd. Abhishek Mukherjee looks back at a day when the usually popular Indian cricket side was treated with antagonism on home turf.

It was supposed to be a top-notch contest. India, the unexpected champion of the 1983 World Cup, pitted against West Indies, the team whose position they usurped and whom they beat in the final. Given that they had beaten West Indies twice in the tournament (and earlier that year at Albion), the expectations were high.

The picturesque Srinagar was scheduled to host her first international match — the first ODI of the 5-match series. Sher-i-Kashmir was surrounded by big, dense vegetation, which gave the cricketers an almost surreal feeling. The crowd was enthusiastic, as expected: it was the biggest moment at the ground, and the usual autograph-hunting was there during the practice sessions. So far, so good.

Things took a different shape next morning. The Indians were booed by a section of the crowd the moment they arrived for the pre-match warm-ups. The jeering spread across the ground, taking both sides by surprise.

Sunil Gavaskar later wrote in Runs ’n’ Ruins: “Being hooted at after a defeat is understandable, but this was incredible. Moreover, there were many in the crowd shouting pro-Pakistan slogans which confounded us, because we were playing the West Indies and not Pakistan.”

Kapil Dev walked out to toss with Clive Lloyd amidst catcalls. Lloyd put India in on a damp pitch. Gavaskar tried a full-blooded drive off Andy Roberts the first ball of the match, but Lloyd grassed a difficult chance at first slip. Shortly afterwards, he edged one to Viv Richards at first slip off Malcolm Marshall.

The applause was astonishing and deafening, and it followed throughout the Indian innings as wickets kept falling. Only Krishnamachari Srikkanth stayed on, missing a lot of deliveries on his way to an uncharacteristic 91-ball 40.

India’s hopes sank when he fell to debutant Roger Harper. The score read 114 for 5 at that stage, and though Kirti Azad hit a couple of sixes, India were bowled out for 176 in 41.2 overs amidst disruptions due to rain and dust storms.

To worsen the situation, “dozens of people invaded the ground during the lunch interval and damaged the wicket, although not seriously enough to halt the game” (Wisden); the raid made little sense, for it could only have aided the Indians.

Once they survived the initial spell from Kapil and Balwinder Sandhu (who conceded 22 from 12 overs between them), Gordon Greenidge and Desmond Haynes went after Roger Binny and Madan Lal. Things were made difficult by a section of the crowd as they taunted and threw objects at the Indian fielders throughout the chase (an apple thrown at Vengsarkar along with broken bottles, stones, and trash at others).

When one of the younger members waved a poster of Imran Khan (why?) at Gavaskar, he immediately acknowledged with a thumbs-up sign. The following over he waved the poster again; this time Gavaskar pointed at the poster, then towards the sky, then to himself, then towards the ground. For once the crowd appreciated the Indians.

Bad light stopped play when West Indies were 108 without loss from 22.4 overs. India had scored 80 after 20 overs while West Indies had scored 108, which meant that West Indies won by 28 runs. Haynes was named Man of the Match for his 88-ball 55, overlooking Greenidge, whose 44 had come off 58 balls.

Jammu & Kashmir Chief Minister Dr Farooq Abdullah apologised to the Indian cricket team at dinner that evening. However, as Gavaskar said, “I don’t think the Indian players were really upset by the behaviour of the crowd. They were stunned and could not understand the crowd’s reaction as they had come to the ground as the World Champions.”

But then, once again, to quote Gavaskar: “To be fair, it was not the entire crowd, but sections of it. But these sections were the most vociferous and thus it seemed most of the crowd was against us.”

– West Indies gave India a 5-0 drubbing in the ODI series. They won by 4 wickets at Vadodara, by 8 wickets at Indore, by 104 runs at Jamshedpur, and by 6 wickets at Guwahati. Additionally, they also won the 6-Test series 3-0.
– Sher-i-Kashmir ground hosted only one other match, in 1986-87: Australia beat India by 3 wickets.
– Srinagar Police arrested 12 people for digging up the pitch during lunch break of the match. They were freed on bail, and charges were pressed in as late as 1989. However, they were acquitted on November 30, 2011 due to lack of evidence.

Man of the Match: Desmond Haynes. 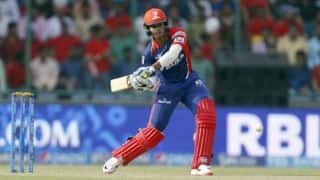