Winning the tri-series ahead of the 2015 World Cup would be a huge boost to India’s confidence.

India do not have a good record in tri-nation tournaments Down Under, having won a solitary trophy in seven outings. However, those records will not matter to this side under MS Dhoni, who have the ability to clinch the series against Australia and England. Nishad Pai Vaidya writes that the blue jersey has a more comforting feeling to the Indian players.

India commence their tri-series campaign at the Melbourne Cricket Ground (MCG) taking on the hosts Australia. This tournament is billed as the ideal preparation, and a dress rehearsal to the ICC Cricket World Cup 2015. For a change, India are moving into this tri-series with a good chance of winning it. They have been a strong one-day side over the last few years, with a sound setup for the format. It is quite a contrast from previous years, where India normally have not been given a chance in tri-series affairs Down Under.

India have played seven such tournaments Down Under and have only one series win to show for it. In fact, in 65 matches, India have been victorious a mere 25 times, and have been beaten on 39 occasions. The only time they won the tournament was back in 2008, when a young side under Dhoni, powered by Sachin Tendulkar’s inspirational performance in the finals, took India to victory. Prior to the start of that tournament as well, India were not the favoured team as the hosts had a far stronger setup with some of their biggest names still around.

Out of the seven times India have played a tri-series in Australia, they have qualified for the finals on four occasions. The only time they won was in 2008, when they sealed both the finals. The other occasions only ended in disappointment. This isn’t a good record for a team that has traditionally been considered one of the powerhouses of one-day cricket. But, if you present these records to this Indian team under Dhoni, they will only brush it aside for it means nothing on the day.

Even during India’s disastrous tour to Australia in 2012, there were flashes of brilliance. There were issues that riddled the team through the tournament; the controversial rotation policy, shuffling the seniors in and out of the playing eleven, did no good to the team’s cause. Also, there was perhaps a hangover of the embarrassing 4-0 drubbing in the Test series. Virat Kohli had emerged as the star then, finishing the tournament with a blistering knock against Sri Lanka, which gave India hope to make it to the final.

Three years down the line, Dhoni’s young brigade has gelled well. There are no glaring issues that need to be sorted out. This team is quite young, with the skipper being the oldest member at the age of 33. Though they lost the Test series, they were not beaten as comprehensively as in 2011, and can move into the ODIs with an upbeat mindset, particularly considering the form of some of their batsmen. Also, donning the blue jersey is more comforting to some of the players; it certainly seems to bring out the best in a few of them. The only problem is perhaps the bowling, but as Harsha Bhogle mentioned the other day at an event, in ODIs India does not have to take 20 wickets unlike a Test match. Thus, the struggles of the bowlers in the Test series should not really worry India, as the ODIs are a different ball game.

Winning the tri-series ahead of the ICC World Cup 2015 would be a huge boost to India’s confidence. Australia are the favoured side given the fact that they are playing at home. England have stepped into a new era and are rebuilding. Out of the lot, India are the most dangerous side. Their opponents would be wary of their strength. 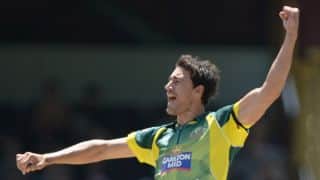