It was a game where the tigers were tamed in their own den. Playing on a surface that backs their strength, the Indian challenge capitulated against an inspired English side. 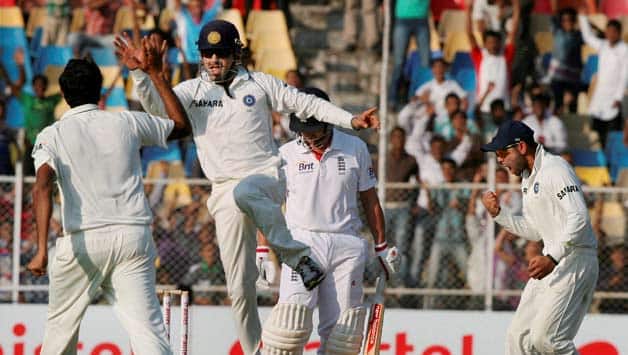 It was a game where the tigers were tamed in their own den. Playing on a surface that backs their strength, the Indian challenge capitulated against an inspired English side. With all the talk surrounding the tourists supposed frailty against spin, who would have thought that the Indians would get entangled in their own web? In the lead up to the series, one wouldn’t have imagined England winning a Test match, let alone with such a huge margin.

It isn’t often that India loses a Test match at home. The last time they lost a Test series at home was against Australia in 2004 when they were beaten 2-1. Since then, India haven’t conceded a series although there have been a few drawn affairs. If one looks at the records of all the Test teams at home since the end of that India-Australia series of 2004, one would find that India have lost the least number of times.

Here are the relevant figures:

*All home matches since November 6, 2004. Qualification: 30 home matches. ** does not include the ongoing Test between Sri Lanka and New Zealand.

India have lost only five Test matches at home since November 2004 and that reflects the force they have been in their own backyard. Sri Lanka is tied with them, but have played three matches lesser than India. Australia’s sheer dominance at home is evident in this table as they have won 34 out of their 47 matches.
India’s five Test defeats at home since 2004 have been convincing with the other team dominating the affair. If the recent defeat to England was surprising, one must look at the previous instances to form a more balanced opinion. Whenever India have been beaten, they have been outplayed and the margin reflects the tale.

Here is the list of India’s defeats at home since November 2004:

England have taken a liking for the Wankhede Stadium as it was the scene of their 2006 triumph as well. Back then they weren’t at full-strength and yet managed to beat India. In the fourth innings India had to chase 313 for victory and they collapsed to a 100 all out. Shaun Udal, the off-spinner was the wrecker in chief as his four-wicket haul sparked a dramatic collapse. Fast forward to 2012, the English spinners have done the trick yet again.

With the defeat at Wankhede, many Indian supporters are a bit sceptical as the aura of invincibility at home has taken a beating. However, fans must not lose hope as recent history would suggest that India bounce back well after a defeat at home. India’s two previous defeats came against South Africa – ones that gave the Proteas the advantage in the series. That advantage was short-lived as India bounced back in series with comprehensive victories on both occasions. Mahendra Singh Dhoni’s men would take hope from that detail and also the fact that they have won a Test in the ongoing series against England