The upcoming ODI series will indicate the same old story or inspired resurrection.

The whitewash is complete. The Tests are over and done with. The No1 Test team has slipped from its perch and landed at the No 3 position, pretty much like an overhyped movie, whose trailers promised a blockbuster, but ultimately turned out to be huge dud. Completely outplayed and humiliated in every aspect of the game, Team India must ponder over what needs to be done to salvage some pride in the upcoming ODIs against England. India’s most shocking loss since 1959, has set enough alarm bells ringing. Some of the selections in the squad deserve a mention in terms of their potential.

For starters Rohit Sharma in the team, inspires a lot more confidence than any of the others. But by his own measure, Rohit has not performed when it has mattered. This might just be the tour that defines him, as it is against one of the best teams in recent history. The moment beckons and will he be the one who will step up and be counted. India could certainly use his form, in the middle.

Virat Kohli’s recent dip in form in the West Indies is a worry, but being the fighter that he is, he might just make this one count.

Varun Aaron has also been selected to bolster India’s bowling attack. Sourav Ganguly has been repeatedly pushing for his selection. There’s no doubting his pace, as was seen in the few matches he played in the IPL. However, his toughness in the English conditions will be tested. He’s making his debut against a team where most of the English batsmen are in red hot form, including the marauding Kevin Pietersen. Maybe Aaron can slip one at the leg stump whenever he walks across his stumps. That extra yard of pace might just knock the leg stump over and keep Pietersen from jumping around all over the place.

If there was ever a time where the “God of Cricket” needed to show his powers and restore faith in the Indian team’s abilities, it is now. With a batting line-up woefully out of form, India’s tail begins with Suresh Raina. The pressure will be that much more on Sachin Tendulkar, Rahul Dravid and Rohit Sharma to deliver.

It will also be interesting to see how Duncan Fletcher handles the situation. It’s the worst possible start that he could get as a coach. If he is what Gary Kirsten says he is, then it can only get better from here. Testing times lie ahead for the Indian team and the upcoming series will indicate whether it will be the same old story or that of an inspired resurrection. 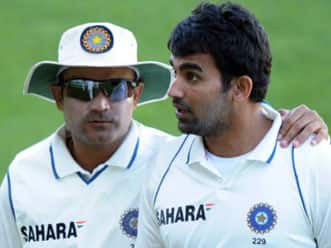 BCCI needs to review its injury management policy for players