The hypothetical question of ‘will this India win in England (or outside subcontinent) if put to play Tests at the very moment?’ remains unanswered.

A series expected to be a neck-to-neck fight between two of the most able sides in the longest format ended up being a one-sided affair with India dominating England thoroughly. Since the draw in the first Test at Rajkot, England were nowhere in contention to make any impact with bat or ball, something that could have given them a positive result. The spinners were on top of their job, the batsmen piled up humongous totals, and the fast bowlers provided the necessary breakthroughs. There was barely a fault in the all-round performance India put up in the series, or, for that matter, in the previous series. But the question remains: will the performance be of this standard once the team heads out to hunt outside home ground?

Let us look at the career graphs of the engineers behind India’s series victory with one match still to spare. Let us start with Virat Kohli, who has not only been in the form of his life, but also in the kind of form that eludes most great batsmen. Recently, my colleague Suvajit Mustafi requested Oxford Dictionary to find some adjectives to define the astonishing form Kohli is enjoying.

.@OxfordWords , can we have new adjectives for @imVkohli ?

Cricket writers will bless you. Our children will be loyal to ur books#INDvENG

Kohli’s career graph has a steep upward curve of late. His Manhattan-chart looks like a presentation of how architecture has evolved over years, the buildings getting taller with time. Within the span of six months, Kohli has scored three double-tons in Tests. He averages over 50 in the format (in all three formats, actually). Despite his incredible run in World T20 and IPL, sceptics marked him out as barely a limited-overs giant. He silenced them with amazing consistency during the ongoing Indian season.

Kohli is yet to face England in England. The awful 2014 England tour must be among the rare nightmares that haunt Kohli to this date. Needless to mention that a cricketer is most comfortable playing in home conditions, and two of Kohli’s double-hundreds came in home. Though the third came in Antigua, it was against a novice West Indies bowling attack. Kohli, who had had his share of experience of international cricket by the time the tour took place, was up against a handful of rookie bowlers, most of whom were untested and inexperienced to give competition to a comparatively more experienced Indian side.

Cheteshwar Pujara, on the other hand, has an extremely skewed record. Pujara is hailed as one who is made for the longest format of the game. He has shown how one can refrain from big talks and let the willow speak. However, his away average is almost half (33.36) of his home average (63.97). While Australia is Kohli’s happy hunting ground, Pujara averages 33.50 there, while his numbers in England is a mere 22.20. This is notwithstanding with the fact that he has played county for Derbyshire (where he scored 90* against Surrey and 100* against Leicestershire) and Yorkshire (57 against Nottinghamshire, 133* against Hampshire), averaging over 50 for both the teams. However, he has no centuries in England in Test cricket.

Ajinkya Rahane’s records are no exceptional than these two. Though he averages more (51.22) away than home (40.23), a lot of that is due to his astounding 121.50 in West Indies. Rahane averages 25.85 against England, which does nothing to bring balance in the team.

The fourth pillar of India’s Test batting line-up is Murali Vijay. Of the quartet, Vijay has the best average batting in England, but surprisingly, his highest in The Caribbean is a 45 and he averages 11.28; even if one combines the home numbers, Vijay averages a mere 16.44 against West Indies.

Indian batsmen typically have a tendency of giving in to sustained lateral movement in helpful conditions. However, while batting on bare tracks at home, things turn out to be easier for them. This can be regarded as one of the vital points behind India’s emphatic victory in the series against England, with due respect to the talent and potential the batsmen have.

Coming to the bowling, it is once again evident that Indian spinners, for that matter, spinners, have dominated the series, as expected. Mohali, one of the fastest tracks in India, did not look to be in its usual form. One of India’s biggest problems outside subcontinent, where India would rather travel with Ravichandran Ashwin as their only spinner in a hope for him to get some turn in most unexpected circumstances, is the fact that Mohammed Shami is injury-prone. Shami is one of the most disciplined of India’s current pack of pacers and is capable of bowling consistently at the right areas, at great pace, with excellent accuracy, and can generate unexpected bounce.

Since his debut, Bhuvneshwar Kumar had the ability to swing the ball. He tried to improve on pace, but got back to the basics once that did not work out. Umesh Yadav has shown signs of improvement of late. Umesh comes with natural pace, and can hit the 140-kmph mark on a consistent basis. He has worked on his wayward bowling over years, and has gained control over movement in the air and off the pitch. If he can be consistent with mixing the swing properly with his natural pace, he can be a lethal option for India in Australia, South Africa and England.

Studying these players gives an idea that India are dependent on different players in different conditions. However, having played so many Tests together, India must be aware of the strengths and weaknesses of each other.

The hypothetical question of ‘will this India win in England (or outside subcontinent) if put to play Tests at the very moment?’ remains unanswered. While spinners got their due off these tracks, Indian batsmen did not look to have combated all their problems, especially against quality pace bowlers. Kohli, who has learnt the art of tackling varying bounce, will face the real Test in England while his mates will also not be spared. To boost themselves up, India will use the confidence they have earned defeating England. It will not be fair to rate the failure of England (or the success of India) depending on the current series. Nevertheless, the series has been a fine display of cricket, something a cricket fan finds pleasure in. 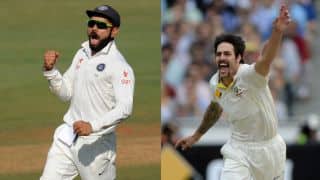 Virat Kohli does a ‘Mitchell Johnson’ to England