Having played almost flawless cricket so far, they should capitalise on that.

India waltzed through Group 2 in the ICC World T20 2014 to top it in the end. They now have a total of five days to prepare for the semi-final on April 4. When the tournament started, not many would have given India the slightest of chances to qualify from the tougher group. But now with form on their side, India must capitalise on it to go ahead and win the T20 World Cup, feels Shrikant Shankar.

The author had written at the beginning of the ICC World T20 2014 that India did not have much chances of winning the tournament. That was based on their abysmal form in T20 World Cups since their triumph at the inaugural edition in 2007. India were pitted against the likes of Pakistan, West Indies and Australia — all pre-tournament favourites. Then there were also the tricky hosts, Bangladesh to contend with. Group 2 was clearly the tougher of the two. India have come through that tough group with one convincing victory after the other. They have surprised many.

But one cannot get carried away with all wins. People only remember who won the final, not who lost before reaching it. India will most likely face South Africa in the semi-finals on April 4. The Proteas currently top Group 1, but their net run-rate is lesser than that of Sri Lanka and New Zealand, who play each other on March 31. The winner of that match will progress with South Africa into the semi-finals. If that match is abandoned or has a no result in some way, then India will face Sri Lanka as their net run-rate is far superior to the other two. These are not teams to be taken lightly.

This tournament has proved that surprises can spring up at every given turn. South Africa may be the perennial ‘chokers’ in cricket, but that agonising run is bound to end at some time for the Rainbow Nation. India must be wary of that. South Africa have some very good players and a few world-class ones in AB de Villiers and Dale Steyn. These players can hurt India if they are to meet in the semi-finals. They have won close matches and lost one nail-biting match to Sri Lanka in the Super 10s. When South Africa usually choked in other big tournaments, they were dominating teams before letting it all go away. India cannot expect the South Africans to repeat history again.

Sri Lanka pose a completely different threat altogether. The two teams have faced each other countless times in the last six years. Both teams know each others’ game in and out. The Lankans are a quality side with many tipping them as the main favourites before the T20 World started. They suffered a setback against England as Alex Hales‘s wondrous century brought about their best match of the tournament. But Sri Lanka have enough quality to regroup and succeed in the competition. They have to get through the Black Caps first though.

As for New Zealand, they might not be the strongest team on paper, but they never are. What they do have is a team that plays as one. They are led by T20I world-record holder Brendon McCullum. The Black Caps also have recent history on their side against Mahendra Singh Dhoni‘s men. They won the home One-Day International (ODI) and Test series in 2014. Conditions, though, are different this time and the outcome could be very different. But India must be prepared to play any team that awaits them in the semi-finals. And India should be ready as they have five days to prepare.

India’s current form is very good. They have beaten Pakistan, West Indies, Bangladesh and Australia quite easily. But it is of no use if they cannot carry that winning momentum into the semi-finals and then to the final. The aim should be to win the T20 World Cup. So, coming second-best will not do. 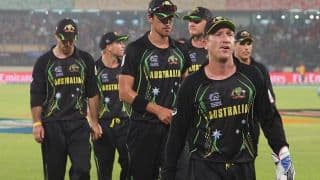