Virat Kohli and Cheteshwar Pujara seemed to have answers to all the questions that were thrown their way on Day One of the first Test against New Zealand. It’s too early to predict whether Kohli and Pujara are capable of churning out such performances on a consistent basis, but well begun is half done. 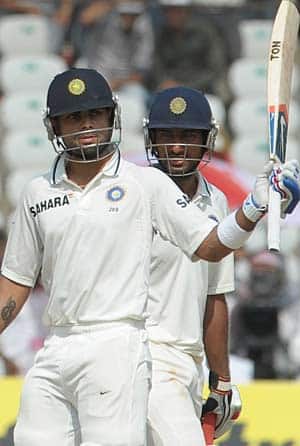 Virat Kohli (L) celebrates after completeing half-century on the first day of the opening Test against New Zealand, as Cheteshwar Pujara looks on © AFP

When Rahul Dravid and VVS Laxman were initially drafted into the Indian batting line-up, it was primarily because there was a void that needed to be filled. No one knew whether the duo would go on to cement their place, or whether they were at least capable of holding fort until more established batsmen were found to solidify the middle-order. But 16 years later, both these batsmen have left the game as stalwarts. They left a void so big that India were forced to look at its future with apprehension. When Team India resumed its journey without Dravid and Laxman on Thursday, many wondered how the Indian middle-order would perform without its two pillars.

However, Virat Kohli and Cheteshwar Pujara seemed to have answers to all the questions that were thrown their way on Day One of the first Test against New Zealand. It’s too early to predict whether Kohli and Pujara are capable of churning out such performances on a consistent basis, but well begun is half done. There is no doubt that both Dravid and Laxman, who must have been watching the proceedings from the comforts of their couch at home, would have silently felt that they’ve passed on the mantle to the right personnel. The 125-run partnership between Kohli and Pujara was heartwarming to watch and had all the ingredients of a Dravid-Laxman stand under pressure.

Kohli has performed phenomenally well in the overs-limit format of the game. He is arguably the best One-Day International (ODI) batsman currently, but what’s more praiseworthy is his ability to chalk out different strategies for different formats. He can effortlessly mix caution with aggression in the 50-over game, can go berserk in the T20s and be watchful, yet score freely, in Tests. Barring Gautam Gambhir and Sachin Tendulkar in the current Indian line-up, very few have such tendency to nonchalantly shift gears.

On the other hand, Pujara looks a perfect fit for Tests. But as stated by his teammate Kohli, the former can bat aggressively if needed. Pujara too emphasised this point during an exclusive interview with CricketCountry. However, for now, he looks tailor-made to bat at No.3 for India in Tests. He has the calm, poise and monk-like concentration like his predecessor Dravid, but to expect Pujara to emulate the legend at such an early stage would be a tad bit unfair and naïve. This is another point that Pujara has tried driving home multiple times already. And the lad has just played four Tests for India thus far.

Nevertheless, Pujara has brought this upon himself. In an era where every young player tries to slog his way into the side, thanks to the increasing number of T20 Internationals and the advent of the Indian Premier League (IPL), Pujara has deemed it right to adopt the old-school approach. While this approach has not only warmed the hearts of cricket purists, it has also provided them with the hope that the likes of Dravid and Laxman can indeed be replaced, since there are players, albeit very few, out there who still believe that being technically sound is more important than stealing the limelight with sporadic blitzkriegs.

Pujara’s ability to play off the backfoot is a task very few youngsters can perform with ease, especially these days. While it is not only a refreshing change to watch an Indian batsman score that way, it’s definitely going to augur well when India travels outside of the subcontinent later. Dravid, too, was a batsman who rarely struggled playing off the backfoot, and hence, with the growing number of similarities, there are bound to be comparisons between the two. But it’s important to draw a line somewhere, because if Dravid is the yardstick, not many are going to get there. After Dravid, what India perhaps needs is a Pujara, although there’s nothing like it if someone can indeed emulate the former’s feats.

During the last 16 years Dravid and Laxman have scored 22,046 runs between them and India didn’t have to worry about its middle-order during this span. However, the duo heading into twilight has changed quite a few things. As Ross Taylor had stated before the commencement of the first Test, New Zealand were relieved that they didn’t have to face these two anymore. But Taylor must now be wondering if he did speak a little too soon. They have their task cut out on Friday morning, as dismissing Pujara doesn’t seem to be easy either. Both Kohli and Pujara have shown that they have what it takes to carve a niche in the original format of the game. Their grit and determination has stood out. Instead of looking to the future with apprehension and wondering whether anybody can fill the big shoes of Dravid and Laxman, India must rejoice the arrival of two fine Test players in the form of Kohli and Pujara. This could probably signal the beginning of a new era for Indian cricket.

IIT student resolves paradox of Shahid Afridi not aging beyond 18!