Wrist-spin has served India wonderfully this season, but how viable is it as a limited-overs option in the long run? Shouldn t India have a back-up plan ready?

Let me be frank here: I have found no discipline of cricket as attractive as wrist-spin. Perhaps that ridiculous action of Abdul Qadir was responsible for this, or perhaps it was Laxman Sivaramakrishnan s famous 12-wicket haul at Bombay or Narendra Hirwani s debut performance. One thing is for sure: my affinity towards wrist-spin certainly predates those early sightings of that blonde, chubby Victorian.

This bias of mine reached a new but expected high when India used two wrist-spinners in the limited-overs matches throughout the home matches in winter. I had felt particularly annoyed at poor Amit Mishra s omission last winter. Mishra had taken 15 wickets in his last series (at 14.33) in a closely-fought series India won the decider to clinch it 3-2 including 5 for 18 in his last match. If he does not play again, Mishra will finish his ODI career with a Man of the Match award in his last match and a Man of the Series award in his last series.

Ravichandran Ashwin and Ravindra Jadeja, the big guns, then took over. Akshar Patel was main back-up. A wrist-spinner, let alone two, was nowhere to be seen in the horizon in ODIs, though Yuzvendra Chahal kept appearing in T20Is, even alongside Mishra.

Exactly why Virat Kohli concentrated on the two wrist-spinners inexperienced ones, too is not clear. Perhaps it was the failure in the Champions Trophy final (Ashwin 10-0-70-0, Jadeja 8-0-67-0); the makeover came after the West Indies tour that followed.

Or maybe it was a Ravi Shastri initiative. Not only is the timing uncanny, one must also remember that Kuldeep Yadav had first received an India call-up in 2014-15, shortly after Shastri had been appointed Team Director. True, Anil Kumble had played a role in Kuldeep s Test debut, but then, Shastri had deployed Hirwani to counter Viv Richards

The reason is not relevant at this point. However, there is little doubt that playing two wrist-spinners had worked. Since Kohli opted for wrist-spin in limited-overs cricket, Chahal has played 17 ODIs and Kuldeep 15. In these matches, Chahal has taken 33 wickets at 21.51 and Kuldeep 31 at 20.09. The economy rates are very comparable. Add the T20Is to the mix, and you will get an incredible pair of spinners.

It has been a joy to watch them in action in South Africa, and that has nothing to do with my nationality. When it comes to spin bowling I have firmly believed in the Arthur Mailey philosophy of spin bowling is an art and art is universal .

Kuldeep took 17 wickets (at 13.88, economy 4.63) and Chahal 16 (16.37, 5.02) from 6 matches, securing the top two spots for series aggregates for any spinner in a series in South Africa, bilateral or otherwise. The numbers look outstanding, even unreal (this is South Africa in 2018, remember?) despite the pasting they took at Johannesburg.

The Wanderers ODI was hit by rain, and the wrist-spinners clearly found it difficult to grip the ball. They were tonked all over, especially by Heinrich Klaasen. However, they were not at their best against other batsmen either. AB de Villiers, David Miller, and Andile Phehlukwayo all went after them, and the spell was broken.

How poor were they at Johannesburg? Chahal went for 12.36 in the match. In his other 22 ODIs he has never conceded over 6.75 an over. That was at Bengaluru against Australia, in a match that saw 647 runs being scored. He has not gone for over 6 in his entire career.

What about Kuldeep? It was Kuldeep s worst, too, though he had gone for 4-0-33-2 against Australia at Chennai a 50-over chase reduced to a 21-over one, and Australia had to chase at almost 8 an over.

In other words, neither Kuldeep nor Chahal has really failed in ODIs before the Johannesburg match. They had got their wickets and had kept run-scoring under control.

The Wanderers match turned out to be a one-off. Klaasen and Miller did not have the Peter May-Colin Cowdrey impact. Kuldeep and Chahal roared back in the remaining matches. And while defending 205 in the Johannesburg T20I, Chahal went for a semi-decent 4-0-39-1 before being taken apart at Centurion.

And yet again, Chahal, the sole spinner, found it difficult to grip the ball. He even dropped a caught-and-bowled chance. In the ongoing series, the wrist-spinners have failed thrice (Chahal twice, Kuldeep once) in 14 attempts; and those were the only ones with wet outfield.

It may be a small sample, but it definitely makes one question the policy of playing wrist-spinners in limited-over matches where rain is predicted.

Counterarguments will probably involve the Thiruvananthapuram T20I. The 8-over was almost a forced start, and both Chahal (2-0-8-0) and Kuldeep (1-0-10-1) did well. But then, if 3 bowling innings are a small sample, then 3 overs certainly are

But we digress. This is not the first time that Indian spinners have faced difficulties handling a soapy ball. Ashwin certainly faced problems (2-0-31-1) on dew against Australia in the 2016 World T20. Jadeja went for 4-0-48-0 in the semi-final against West Indies and Ashwin 2-0-20-0. With 8 to score off the last over, MS Dhoni did not summon Ashwin (or Suresh Raina). Instead, he opted for Kohli.

True, Kohli had dismissed Johnson Charles earlier that night, but he had not bowled in T20Is since 2012-13, and has not bowled since. It was that desperate a measure, for Kohli was the closest Dhoni had to a seamer that night. Of course, he could have got himself on, but then, he has bowled 2 overs in all T20s

Dew had driven Dhoni to desperate measures that night. And as anyone will tell you, handling a wet ball is harder for a wrist-spinner than it is for a finger-spinner.

It is evident that Kuldeep and Chahal are likely to face problems if they do not get a dry ball. This is not good news, since the next year-and-a-half will be spent in preparation for the World Cup, and the World Cup will be played in England.

The semi-finals will be played at Birmingham and Manchester, cities renowned for precipitation. True, the Indian spinners had played a major role in the 2013 Champions Trophy final (Jadeja 4-0-24-2, Ashwin 4-1-15-2, Suresh Raina 3-0-19-0) as India successful defended 130 in 20 overs. However, as both Dhoni and Alastair Cook had pointed out after the match, it was a difficult pitch to bat on: indeed, only two bowlers went for over 6.50 that day.

India came into the T20I series with four fast bowlers and Hardik Pandya as the all-rounder. Jasprit Bumrah s injury removed an alternative immediately, and they played all three of Bhuvneshwar Kumar, Jaydev Unadkat, and Shardul Thakur. Things might have been different if they had gone in with an all-pace attack.

Unfortunately, the scenario is unlikely to change in the World Cup. India will probably pick seven batsmen and seven bowlers to go with their wicketkeeper. If Hardik fills up a bowler s slot, then India will be left with six. And if they pick two wrist-spinners, they will be left with five pacers not a single bowler more than what you need for an all-pace attack.

Should India hone more fast bowlers for the tournament to ensure that, if conditions demand, they can go in with an all-pace attack? If yes, will four pacers and Hardik serve the purpose?

Or should they get one or both of their finger-spinners back in the mix? Remember, they are India s main bowlers in Test cricket

If they don t do either, will it be wise to plan ahead for a World Cup in England, where rain is a near-certainty, with two men practising a discipline that is almost certain to be affected by a wet outfield?

Will India persist with their wrist-spinners irrespective of conditions? Or will there be a Plan B, based on conditions and opposition?

South Africans are not great players of spin, but they butcher anything short, full, or wide. Heinrich Klaasen is not an oddity. JP Duminy batted quite efficiently at Centurion.

The big guns de Villiers, Faf du Plessis, Hashim Amla, and Quinton de Kock have not played here. These are excellent batsmen, and one needs to be extremely accurate to dominate them.

Mind you, South Africa are not the side to beat in the big tournament. Since the 2015 World Cup debacle, the Englishmen have got their runs at 6.50, the most.

Kuldeep and Chahal bowl slow through the air. They want to attack, which obviously suits the Kohli philosophy towards cricket. Unfortunately, in the era of superbats, a really slow delivery can go horribly, even humiliatingly wrong if it is slightly off target.

True, they have been accurate (something common to all great spinners), but what if that takes a toll while bowling with the wet ball? Will there be a back-up plan to live by if the wrist-spinners fail?

Can they maintain the same pressure if conditions are hostile enough to deny them a proper grip? It is not a matter of ability here. We all know they are talented and intelligent, even on flat pitches, but how well can they adapt if gripping the ball becomes a challenge, let alone giving it that rip?

The upcoming England tour may answer a question or two. For all you know, that will be when they will decide upon the nucleus of the side. 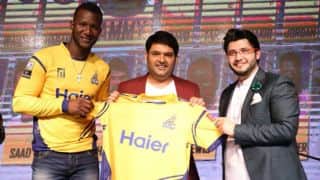 David Warner: Found it draining shifting from Tests to ODIs