India has now gone without a victory in eight consecutive games.

India has now gone without a victory in eight consecutive One-Day Internationals overseas. Abhishek Mukherjee tries to find out how Team India can turn around en route the ICC World Cup 2015 to be held next year.

It has been eight One-Day Internationals (ODIs) now. India has lost, regained, and lost the number one position; the opposition has, as Mohammad Azharuddin used to say, “batted well, bowled well, and fielded well”; they have come close to victory on a couple of occasions, but that has been about it: in short, the World Cup champions are on a steady downhill route unless the Board of Control for Cricket in India (BCCI) decides to relocate the tournament to India, or better, in Sri Lanka.

Let us put all the angst out of the way for some time now: what steps can India go through if they are serious about retaining the ICC World Cup 2015 next year?

The same, unfortunately, cannot be said of the others: Shikhar Dhawan, Rohit Sharma, and Suresh Raina have been exposed cruelly against the hostile fast bowlers. It was not about how many they scored: it was about how much they looked like scoring. The trio is not, as things stand today, equipped to handle pace and bounce.

Replacing one batsman is fine: how does one replace three?

Perhaps the most important reason behind India’s success story in ODIs over the years has been the big scores their batsmen kept on delivering. Despite his phenomenal average and strike rate (and an insatiable appetite for hundreds) Kohli has crossed 135 only once in his career and 120 only four times. Contrast these numbers to those of Sachin Tendulkar (12 scores over 140) and Sourav Ganguly (five over 140) — that too in an era when 300 was still considered formidable (though not impossible to chase).

Kohli has emerged in flying colours in all formats of the sport: it would be unfair to ask him to lift his already superlative standards. However, if you are fighting a lone hand in an ill-equipped batting line-up, you probably need to stay on till the final ten overs. Consistent big partnerships between Kohli and Dhoni towards the end might change things to a great extent.

This, of course, brings us to the second part of the solution: if Kohli bats at three, Dhoni, a proven success against bounce in ODIs, can always follow him at four. A rapidly amassed 200-run partnership between might just change things in India’s favour, paving the way for the big-hitters to come.

Who will, then, be the big-hitters? This is where Raina may play a crucial role: ask him to survive bounce and he may struggle, but send him out and give him the liberty to give it the full throttle, and you will suddenly find that few batsmen can be as dangerous as him.

That is, of course, a role that can be assigned to Rohit as well. Both have been equally inefficient against pace and bounce, but on his day Raina is way ahead of Rohit in terms of sheer numbers: their averages are the same (35.35 for Raina, 35.68 for Rohit) but when it comes to quick scoring Raina (91.4) outscores Kohli (78.6) by close to a run an over.

How does one solve this problem? Obviously, the solution does not lie within the squad. Given that Sehwag has still not sorted out his problems, he may be out of the equation — but the same does not hold for Gambhir, who has been doing a decent job of late. He may provide the one big thing missing at the top of the Indian batting order: stability.

The other option, of course, is that of Cheteshwar Pujara. No one seems to know exactly why Pujara has not played more than those two ODIs in Zimbabwe for what may easily have been passed as an India A side, but his excellent List A averages do not seem to be enough for him to make his way into the side. It seems almost unreal that someone with a List A average of 54.57 has not been considered, but then, the idiosyncrasies of Indian selectors are hard to fathom.

This is also the same Pujara who was second on the strike rates list (with a 300-run cut-off), scoring 82.1 runs per hundred balls and scoring at 116.33 in the 2005-06 Under-19 World Cup. It is not as if he has failed in the shorter version: one of the best batsmen in Indian cricket has not been tried at all.

If the selectors decide to open with Gambhir and (one can always hope) Pujara and set up the stage, Kohli and Dhoni might follow at three and four to provide more solidity to the batting. If the Indian captain is not comfortable about the number four position, he can move one place down (but not two, which would not give him enough overs or will ensure he comes after a collapse).

Given that Yuvraj Singh is (probably) ruled out of the equation, who will be the number four? Ajinkya Rahane has not done too well in the ODIs (or List A for that matter), but he has shown the pluck to stand up against the South African fast bowlers at their den. Given a proper platform he may also be shred attacks to pieces. Should he be persisted with?

One might also look for options in the form of Ambati Rayudu and Dinesh Karthik. There may be doubts over Karthik, but his scores outside the subcontinent (barring minnows) read 63 and 38 not out (in South Africa) and five, 60, 77, 22, 91, and eight (in England), which are rather impressive numbers. Rayudu, on the other hand, did not seem as uncomfortable as some of his senior colleagues. Manoj Tiwary could have been another viable option — had he spent more time not being injured.

Dhoni had tried out a new experiment to counter the motions in the fourth ODI at Hamilton: he played three all-rounders in the form of Ravindra Jadeja, Ravichandran Ashwin, and the debutant, Stuart Binny. Though Binny did not get adequate opportunity with the bat or the ball it was evident that Dhoni was keen on taking desperate measures.

Varun Aaron is quick and may surprise sides with his raw pace, but his too raw to lead an attack.

Of course he was following the score-as-much-as-you-can-we-will-chase-it-down approach adopted by the Sri Lankans in the 1996 World Cup: the Sri Lankans had stuffed their side with a combination of reliable and explosive batsmen (of whom Sanath Jayasuriya and Aravinda de Silva bowled and Ramesh Kaluwitharana kept wickets); they knew that they did not have the bowling firepower and hence preferred to chase (even in the final) — a measure that Dhoni had also tried to adopt.

There is a three-pronged catch, though: first, the Indian batting line-up is not as strong as the Sri Lankan one was; secondly, the surprise element to catch the enemy unawares will not be there; and most importantly, the tournament will be played on unfamiliar terrain.

The method may work, but it needs to be worked upon for a longer period of time — for the simple reason that the Indian bowling has been, for lack of a better phrase, way below par. Bhuvneshwar Kumar has not done justice to the promising start of his career (he had never been a potent old-ball bowler anyway) while the reverse-swing of Mohammad Shami might not be as effective with the law involving two new balls at the start of an innings.

Is it, then, time for Zaheer Khan to make a comeback? He is still wily, but has clearly seemed well past his prime. The Indian spearhead of the previous World Cup seems to be a shadow of the past, and the more-than-capable support act played by Munaf Patel can only be found in the video highlights of the tournament. Not only does the side need a Zaheer to open bowling, they also need a Munaf at the other end to keep things tight. He may be fast, but a career economy rate of 6.07 does not speak too highly of Umesh Yadav.

Varun Aaron has been fast and may surprise sides with his raw pace (his first six ODI wickets were all bowled; the previous record was three), but his too raw to lead an attack. Ishwar Pandey may gain favour as the options run out, but the inexperience bit holds for him as well. However, it is probably time to give both Aaron and Pandey (especially the former, given the pace he extracts) extended runs during the ODIs leading to the World Cup.

The most intimidating part about the problem is the not the fact that India has performed abysmally with the ball: the bigger threat seems to be the fact that there does not seem to be a way out. Praveen Kumar has been out of favour (and has suffered from multiple issues over time) with the selectors, which is unfortunate given his performance in Australia in 2007-08.

The heroes of the previous World Cup are perhaps past their expiry date; the current pack has failed over and over; grooming a youngster (which may be the only way out) can backfire; and unless there is a tsunami that wipes out the whole of India leaving only a handful standing, Ishant Sharma has probably played his last match for India for some time.

Which is where the all-rounders strategy might come into play: the ‘Stuart Binny genre’ has other members as well — Laxmi Ratan Shukla and Rajat Bhatia (both long-time workhorses at domestic level), are only two examples. This will not be familiar territory for them, but one must remember that these men can bat; with the ball, too, they rely on accuracy and stamina. New Zealand, if one remembers, had thrived adopting a similar strategy in World Cup 1992.

Ashwin is certainly not good enough to pip Jadeja into the side with the bat or the ball, which would probably keep him out of contention. Given the fact that the Australian tracks have generally preferred leg-spinners, Amit Mishra may get the nod, but one might think that the all-round skills of Parvez Rasool can come in handier than others.

Both Mishra and Rasool are classical, aggressive bowlers, but Rasool’s batting might give him the edge. In any case, other than Aaron (and probably Shami) they may be the attacking option Dhoni may look out for to go with the defensive, accurate ones. Playing both together may be detrimental: the batsmen might have found it difficult to clear the ground against Ravi Shastri and Laxman Sivaramakrishnan in Australia close to three decades back, but things may not be that improbable with smaller grounds and heavier bats.

With some serious fielding practice there is no reason that India would not be able to bounce back. They have the talent: the team may still do wonders with some intelligence selection, a revival of the willingness to win, and a couple of doses of Mike Horn. After all, they are still the defending champions. 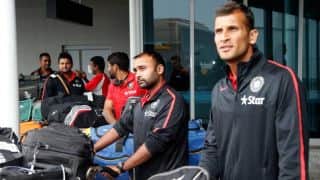