Since the last four years, Zaheer has been India’s leading bowler in ODIs. But he too has been in the limelight for injuries and poor form off late. Umesh Yadav and Ashok Dinda could possibly ease the burden off Zaheer’s shoulders. 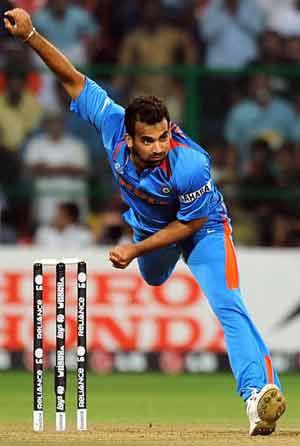 The unfortunate part is that presently only Zaheer Khan looks a threatening bowler, whereas the others are yet to learn the tricks of the trade © AFP

Indian skipper Mahendra Singh Dhoni didn’t mince words when he recently stated that Zaheer Khan’s burdens should be shared by other bowlers. The Indian spearhead has been the solitary thorn in the opposition flesh batsmen in the last few years. None of the other Indian bowlers look ready to take over the mantle from him in the near future. The think-tank thus needs to use him sparingly in the next couple of years, until some young bowler appears ready enough to lead the Indian attack with the same precision.

Since the last four years, Zaheer has been India’s leading bowler in the One-Day Internationals (ODI), next only to Harbhajan Singh, in the Test arena. However, Zaheer’s strike rate and average are much better when compared to the latter. Only Ishant Sharma has looked close enough to Zaheer in the fast bowling department, but he too has been in the limelight for injuries and poor form off late. Apart from Ishant, none of the other bowlers have looked like getting into Zaheer’s big boots. Having said that, the current crop of Indian bowlers have the wherewithal to succeed, especially under Zaheer’s tutelage.

Pacers like Umesh Yadav and Ashok Dinda could possibly ease the burden off Zaheer’s shoulders. Dinda has received a lot of support from former Indian skipper Sourav Ganguly, who described him as the best bowler in India currently. Even former South African spearhead Allan Donald stated that he was impressed with Dinda’s attitude and skills. Hence, it’s imperative that he keeps getting picked and given a lot of overs to bowl. As Zaheer mentioned, it is very critical for a bowler to bowl as many overs as he can. Only then he can improve.

On the other hand, Yadav has done well to not cut down on his pace. Also, the way he’s recuperated from his rare injuries is commendable. However, he’s yet to dominate with the ball. He tends to get hit on a frequent basis and his economy rate is quite high in ODIs (6.26) and Tests (4.40). His average and strike-rate in the ODI format too don’t look good. But he’s still a young bowler learning the rigours of international cricket, and if someone can groom him into hitting the right line and length without compromising on the pace, it’ll do a world of good for him and Indian cricket.

Not just Yadav and Dinda, but there are quite a few bowlers who are capable of filling the void that will be created once Zaheer exits. As Dennis Lillee said while retiring from the MRF Pace Academy, “I certainly think you have got a pretty good attack at the moment. As I am talking to you, we have got about 10 young guys who will be knocking at the door within a year or two.” In the same breath he also showered laurels on Zaheer by calling him a standout, complete and smart bowler.

The unfortunate part is that presently only Zaheer looks a threatening bowler, whereas the others are yet to learn the tricks of the trade. Hence, it’s crucial to ensure that Zaheer doesn’t run out of steam playing insignificant ODI matches. India has struggled in his absence during the past, and they wouldn’t want to miss him again during important tournaments. Now that the ODI series against Sri Lanka has already been won, it would augur well to rest Zaheer and give the other young bowlers a go. Agreed, it’s vital that India field a full-strength team for every international game, but it’s equally crucial to rotate the fast bowlers and allow them rest whenever possible.

Resting Zaheer for the final ODI also allows the other bowlers to shoulder additional responsibility, and the likes of Irfan Pathan, Yadav and Dinda should make full use of this opportunity to stand up and be counted. The Indian spinners have been doing a good job against an out of form Sri Lankan batting line-up, and hence it’d do no big harm to experiment with the series already in the bag.