The erratic bowling performance during the last 10 overs at Brisbane against both Australia and Sri Lanka shifted the momentum of the game and put India in a spot before they had the chance to challenge the target. 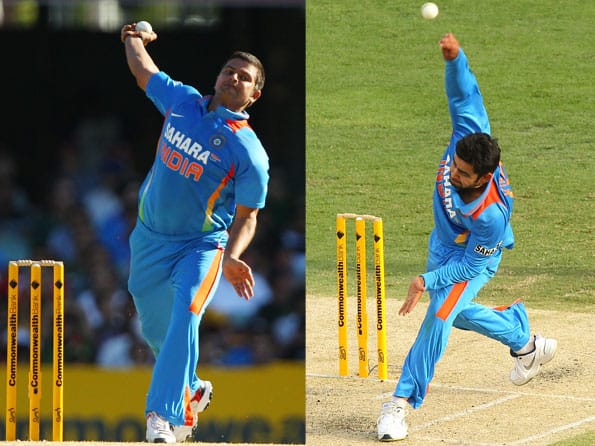 If India has to turn to Suresh Raina (left) and Virat Kohli (right) to bowl the 49th and 50th overs of a ODI, then it is an indication of the mess the Indian bowling finds itself in © Getty Images

India’s appalling bowling at the death has been their coup de grace in two successive games. The erratic bowling performance during the last 10 overs at Brisbane against both Australia and Sri Lanka shifted the momentum of the game and put India in a spot before they had the chance to challenge the target. The bowling that looked disciplined and impressive after the first One- Day International (ODI) has had a reversal in fortunes due to their inability to plug the torrential flow of runs in the slog overs.

The rain-shortened first game of the ongoing tri-series saw the Indian bowlers being ruthlessly carted around the ground. The return of Zaheer Khan for the second ODI bolstered their attack and took the pressure off Vinay Kumar. The memories of the torrid start to the series were pushed aside as they put in disciplined performances in three consecutive ODIs. They kept things tight throughout and finished it well with a clean performance during the slog overs.

The Indians haven’t started well in the two ODIs at Brisbane, but did brilliantly well to pull things back during the middle overs. The Australian and the Sri Lankan batsmen weren’t allowed to get away in the middle overs as a cauldron of pressure was built around them. However, all those encouraging showings went awry as the Indian bowlers pushed towards the other end of the spectrum after the completion of 40 overs. They ended up conceding more than 90 runs in the last 10 overs of both games – a development that changed the complexion of the two matches.

Here is a statistical breakup of India’s performance in the death overs during the last two ODIs:

The figures of the bowlers used by India during the slog overs reveal a gloomy picture. Here are the bowling figures (from overs 41-50) of those bowlers during both the ODIs:

The real damaging figures are those of Vinay Kumar. He has been a revelation during this series as he has picked up pace and bowled in the right channels, but has lost the plot during the last two matches. In fact, prior to India’s arrival in Brisbane, he was fantastic during the slog overs as he kept it tight and didn’t allow the batsman any room to swing their arms.

Even during the first ODI, when the other bowlers took a pasting, his figures stood out. In the last two ODIs, he has bowled very well before the onset of the slog overs and conceded around four runs an over. As the table suggests, the figures took a beating as he hasn’t bowled well and has been hit around the park. The accuracy and discipline he showed during the previous games has gone for a toss. The Dan Christian onslaught in the game against Australia just signifies India’s woes during this important passage of play as India’s best bowler in the tri-series was effectively targeted.

India have picked up a collective total of four wickets during the slog overs of both the games. Taking wickets is the best way to stem the run-flow – something the Indians have failed to do.

The way captain Mahendra Singh Dhoni (7th ODI vs Australia) and Virender Sehwag (8th ODI vs Sri Lanka) rotated the bowlers was appalling. Dhoni bowled out Zaheer before the 40 over mark against Australia. His excuse was that Zaheer was cramping and he wanted him to complete his quota. Had he bowled during those damaging overs, the story may have been different as it would have given India the strength to outwit the batsmen.

Secondly, Sehwag bringing Raina and Virat Kohli into the attack for the last two overs of the innings wasn’t just damaging on the scoreboard. Vinay and Yadav had overs in hand and Sehwag’s action was an explicit vote of no-confidence on the duo. It is true that they were going for runs; however they are the strike bowlers and always have the skill to comeback. In contrast, Raina and Kohli are part-timers and to expect them to bowl economical overs with the batsmen in an aggressive was asking too much.

The two consecutive losses have made it tougher for India to qualify for the final. The death bowling certainly needs utmost attention. If they don’t make amends, they can kiss the finals goodbye!