With one entire day washed out, it will be West Indies, who will be more keen on forcing a result than India, considering they are 1-0 down in the series.

India have all to do in the next two days of the third Test against West Indies, if they are to force a result. West Indies are comfortably placed at 107 for 1, 246 runs behind India going into Day Four. Sadly, Day Three was washed out due to rain, which makes it all the more difficult to force a result.  With more rain predicted on Day Four, this match is truly headed for a draw. But let’s, for one second, assume that we do get two full days of cricket. Play will start early on both days to make up for the lost overs. Full Cricket Scorecard: India vs West Indies, 3rd Test match

There have been a couple of instances in the past where India under Virat Kohli have had to take a couple of bold decisions. Both of them happened to be during India tour of Australia 2014-15. In the absence of regular skipper MS Dhoni, Kohli took charge and led India to the brink of victory only to fall agonisingly  short at Adelaide. Again in Sydney – now the permanent captain of Team India in Tests – Kohli once again had a chance to chase down a stiff target, but a mini collapse in the final session of Day Five, he decided against it. India were already 0-2 down at that point and the worse that could have happened was India could have lost 3-0. Day 3 Report: Play called off between India and West Indies due to persistent rain

Since then, Kohli has won a series in Sri Lanka and also led India to a 3-0 drubbing of South Africa at home. In the current Test against West Indies, India will first have to bowl the hosts out quickly or wait for a declaration. If West Indies are to declare, they will do so only when they think that they cannot lose from here. Already 1-0 down in the series, the last thing the West Indies would want is to lose this match and go to Port-of-Spain with nothing to play for.

West Indies have lost just one wicket so far and ended Day Two in a good position. They still trail India by 246 runs. More than India, it is West Indies, who need to win this and draw level, if they still aspire to win the series. India, on the other hand, can sit back and run down the clock. But is that what they should ideally be doing? Do they allow West Indies to take easy ones and twos, cut the boundaries and delay their declaration or should India look to get the remaining nine wickets as soon as possible and take charge with the bat?

For millions watching back home, they surely will want to see a tight finish to the match. For that to happen, West Indies have to make a sporting declaration. If the decide to wipe out the deficit, this match will surely end in a draw. They will have to declare at a point they feel safe.

What will be India’s approach, when they bat? Will they look to score quickly and look to win the match or will they be happy taking the 1-0 lead heading to the fourth Test. We have heard Kohli often say that he wants to win every game he plays, regardless of the format. India will perhaps get a chance to bat with around three sessions left, hopefully with a slender lead. India’s top five batsmen have the ability to score at a brisk pace. They can perhaps give themselves a more than a session and make West Indies chase.

West Indies in pursuit to get those runs may lose a few wickets and that could be India’s chance to get wickets in a hurry and the match could go down to the wire.

Everyone loves an exciting, nail-biting game. With West Indies having played so well at the end of the second Test and also in this Test so far, they certainly will look to do everything in their means to go on and win this match. As far as India are concerned, they may keep in mind the fact that they have a slender lead in the series and will not want to West Indies to level with series going into the fourth Test. India will be happy to have their lead intact and not mind playing out a draw and leave for Port-of-Spain. If rain does not play any part in the remaining match, result is still very much possible, but India do not need a win as badly as West Indies and may just decide to go defensive for the rest of the match. 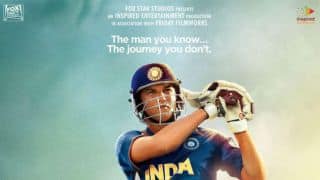