India should have opted for a spinner instead of Vinay Kumar

India should have opted for a spinner instead of Vinay Kumar

After the first day’s play at Perth, it can be said that the Indian batting line-up hasn’t yet learnt from the mistakes it committed at Melbourne and Sydney. How else could one explain India’s batting debacle on the same surface that David Warner stormed to a century in just 69 balls? 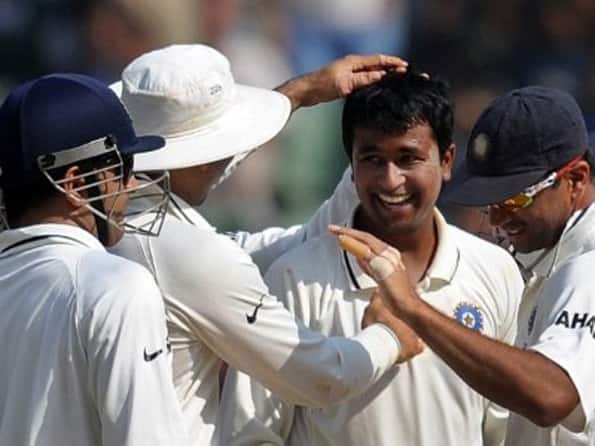 In my previous, Agnipariksha awaits India against four-pronged pace attack on fiery Perth, spoke in brief about the difference in attitude and mindset between the Indian and the Australian side. After the first day’s play at Perth, it can be said that the Indian batting line-up hasn’t yet learnt from the mistakes it committed at Melbourne and Sydney. How else could one explain India’s batting debacle on the same surface that David Warner stormed to a century in just 69 balls?

Surely, it appeared as though the Indians did give a lot of importance to the green tinge on the Western Australian Cricket Association (WACA) surface. Few overs into the game, it was evident that there weren’t any demons in the wicket. Yes, there was extra bounce, but Gautam Gambhir and Virat Kohli’s brief persistence in the middle proved that it wasn’t unmanageable. Also, one gets the feeling that India missed a trick by not opting to play a spinner in this Test.

It is true that Ravichandran Ashwin didn’t really impress with the ball in the first two Tests, but things would have probably been a little different for India had skipper Mahendra Singh Dhoni persisted with him for the Perth Test. Ashwin has been an efficient spinner on the subcontinent tracks, managing to extract bounce and turn even from flat surfaces. The Perth wicket could have been helpful for Ashwin considering the fact that it provides extra bounce.  Also, Ashwin was no mug with the bat down the order, and his contribution with it was certainly missed on Day One of the first Test.

However, Ashwin’s role in the side was to pick wickets. Any number of runs scored by him must be considered a bonus. Having underperformed with the ball, it would have been understandable if he was replaced by another spinner in the form of Pragyan Ojha. Former Indian skipper Sourav Ganguly too threw his weight behind the inclusion of Ojha saying, “I think the left-arm spinner could come in and do well. He’s a good bowler and he’s ready, and Ashwin obviously hasn’t bowled well.”

Unfortunately, Ojha was left in the lurch yet again.

The fact that India too decided to go in with four pacers was surprising. For decades, India’s strength has been spin. Moreover, the Australians aren’t very proficient players of spin; at least when compared to players from the subcontinent.  Vinay Kumar’s inclusion did take many by surprise, although it wasn’t completely unexpected. The hue and cry around the WACA surface before the start of the third Test definitely had an impact on both MS Dhoni and Michael Clarke’s thinking, and hence the inclination towards playing an extra pacer.  The move did pay great dividends to the Australians though, as Ryan Harris’ economical spell choked the Indian batsmen from one end, and ensured that they fell like nine pins from the other. He also dismissed India’s most successful batsman on this tour thus far – Sachin Tendulkar.

It is understandable that the Australians decided to go in with a four-pronged pace attack considering the fact that spinner Nathan Lyon wasn’t adding any value. Lyon never looked threatening even when he was bowling to the Indian tail. Added to that, the Indians never looked comfortable facing the quickies in Melbourne and in Sydney. Therefore, it only made sense that the Aussies had decided to use just pace against India at Perth. On the other hand, none of the Indian pacers except Zaheer Khan managed to get under the skin of the Australians in this series so far. Vinay was not going to trouble the Aussies in any manner with his medium-fast bowling. This was evident on Friday when Warner took him to the cleaners, making him the costliest of all Indian bowlers. Hence, one gets the feeling that India should have stuck with a spinner at Perth.

Ojha would have been a better choice ahead of Vinay. As Nishad Pai Vaidya wrote in his article Ashwin or Ojha Laxman or Rohit Tough questions before India’s think tank, history reveals that left-arm spinners have been successful at Perth. The Australians have already found it difficult to score freely of left-arm bowler Zaheer Khan, and hence one gets the feeling that another left-arm bowler in the form of Ojha would have probably troubled the Australian batsmen further.

Nevertheless, the damage has been done. It will take a humungous effort from India to turn this match around from here. Zaheer Khan, Ishant Sharma and Umesh Yadav will have to bowl out of their skins to script a turnaround. Vinay, too, has to focus on hitting the right areas rather than worrying about his pace. Only time will tell if India has the ability to bounce back from this situation and put up a fight.