India won the last time they visited Durban and should take lessons from that into the second Test.

There may be some air of confidence but also a hint of caution as India take on South Africa in the second Test at Durban on Boxing Day. To say that India outperformed the expectations is an understatement. While many felt they would be walloped by the much stronger South African unit, they did extremely well to put themselves in a position to win the game. Of course, they can take many positives from the first game, but there may also be a few things Mahendra Singh Dhoni and co. would have to think about.

The last time India visited Durban to play a Test, they stunned South Africa on a surface that helped the seam bowlers. It came at the back of a crushing defeat at Centurion, on a pitch that was meant for batting. Looking back, Dhoni, Zaheer Khan, Murali Vijay, Ishant Sharma and Cheteshwar Pujara are the only ones who played that game. That shows how much the Test line-up has changed since 2010. However, there are many lessons India can take from their previous game here.

It is likely that there could be some grass on the pitch and it may help the seam bowlers. Zaheer becomes a crucial factor in such games as he can swing it and hit accurate areas. Ishant too may get more bounce given the fact that he uses his height to get it steep. However, it would be interesting to see how Mohammed Shami bowls on this surface. India trust him to pick wickets and he is the one bowler who combines brisk pace and movement. In the One-Day International (ODI), he recorded figures of three for 48. This may be a surface he would enjoy bowling on.

But, where does Ravichandran Ashwin fit into the scheme of things? He hasn’t had a successful run away from home and Pragyan Ojha may be considered instead of him. However, one may go down memory lane and find that Harbhajan Singh had done well at Durban the last time and helped India win the game. It is imperative for Ashwin to hit the right areas as there may be something in it for him although one usually finds a seamer’s paradise at Durban.

On the batting front, Pujara and Virat Kohli are the main men and they showed good application at Johannesburg. Kingsmead may present a different challenge as there may be more movement in the air there. Pujara may well remember the last Test he played there as run-scoring had become extremely difficult on that surface. With the weight of experience behind him and the ton at Johannesburg, he would be a lot more confident as India land in Durban for the big day.

One thing India may take heart from the fact is that South Africa don’t enjoy a very good record at Durban. They have won only one Test since 2006, the last time they beat India there. India did put them under pressure in the first Test and there may be an added burden of history. But, this South African unit is much stronger than those of that played in the previous years and perhaps may be ready to shed that stigma. 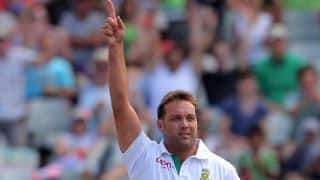 Jacques Kallis: Another legend of world cricket calls it a day