India nearly got to the massive 197-run target despite their two main batsmen — Virat Kohli and Rohit Sharma — falling early.

India lost an incredibly close ICC World T20 2016 warm-up match to South Africa at Mumbai by just 4 runs. The result did not go in India’s favour, but India nearly got to the massive 197-run target despite their two main batsmen — Virat Kohli and Rohit Sharma — falling early. It was a consolidated batting effort which saw Shikhar Dhawan and Suresh Raina setting up the chase before retiring simultaneously. That left Yuvraj Singh and MS Dhoni with an uphill task, but they nearly beat the odds to pull off a win. Full cricket scorecard: India vs South Africa, ICC World T20 2016, warm-up match at Mumbai

India will not feel too bad about the loss. For one thing, two of their main bowlers, Ravichandran Ashwin and Ashish Nehra, did not bowl at all. Jasprit Bumrah had a rare off game, but even then he managed to take two wickets. As for the others, Hardik Pandya was the pick of India’s bowlers with 3 for 36, while the returning Mohammed Shami picked up a couple of wickets as well. Having conceded 196, the onus was on the batsmen to win them the game. Full cricket updates: India vs South Africa, ICC World T20 2016, warm-up match at Mumbai

If there have been two batsmen who have led India’s chases from the front in recent times, it would be Rohit and Kohli. Both batsmen failed this time around, but it was a testament to the other batsmen that India did not surrender after those early losses. At 16 for 2 with Rohit and Kohli back in the hut, India’s chances diminished rapidly. READ: South Africa pip India by 4 runs in thrilling ICC World T20 2016 warm-up match at Mumbai

Ajinkya Rahane failed to get going, and was dismissed for 11 off 9 balls, but after that the partnership between Shikhar Dhawan and Suresh Raina took India close to an unlikely win. The duo put on 94 runs in just under 10 overs to stabilise India’s chase. Then, with 55 to win off 24 balls, both men retired simultaneously. Had both set batsmen been there till the end, chances are India would have pulled off the win. Instead, Dhoni and Yuvraj were left with a steep chase right from the start.

The old guard got into the action immediately. Dhoni hit Chris Morris for back to back boundaries, and then smashed Dale Steyn for a six and a four off the first two balls of his next over. Yuvraj hit Kyle Abbott for a six and a four as well, following which India were left with 14 to win off the final over. Morris managed to keep it down to just 9, and India lost by 4 runs.

This was far from a demoralising loss; if anything India will take immense confidence from the fact that they managed to come within striking distance of a win even though their two biggest guns failed to fire. As far as warm-up matches go, this one bodes well for India moving further in the tournament. Their momentum has not been halted; a psychological boost has been enjoyed. 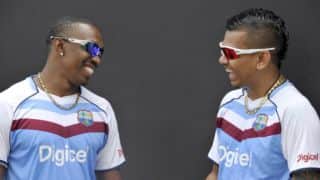