Pujara has a chance to establish himself in the ODI squad before 2015 World Cup.

With Cheteshwar Pujara’s inclusion, the selectors have probably sent out the message that they want to keep him under the radar in the lead-up to the 2015 World Cup. Abhishek Mukherjee looks at a decision that probably means more than it meets the eye.

Exactly why The Board of Control for Cricket in India (BCCI) organised a trip to Bangladesh in June (when a rain is always on the cards) will perhaps remain elusive. The makeshift series crammed between a long winter (tours of South Africa and New Zealand, Asia Cup, ICC World T20 2014, followed by the Indian Premier League) does not really serve any purpose, especially towards the upcoming tour of England.

The good aspect of the tour is that the six big guns — MS Dhoni, Virat Kohli, Shikhar Dhawan, Ravichandran Ashwin, Rohit Sharma, and Ravindra Jadeja — have earned a well-deserved rest; the selectors have decided to send what can safely be called an India A side — in what seems to be an encore of the Zimbabwe tour of 2013.

Given that he was not rested, Suresh Raina was the obvious choice as the leader, and men like Ajinkya Rahane, Ambati Rayudu, Umesh Yadav, Amit Mishra, Stuart Binny, Vinay Kumar, and Mohit Sharma have got yet another chance to establish themselves. One can only hope that Manoj Tiwary will go through the tournament without picking up another injury, and this might be an opportunity that will make Wriddhiman Saha’s career.

Parvez Rasool may finally make his international debut, and the Indian Premier League (IPL) has pushed men like Kedar Jadhav and Akshar Patel into the forefront, and most importantly, this may be the series that may re-establish Robin Uthappa on the big stage.

Which brings us back to Pujara — the man with arguably the best technique among contemporary Indian batsmen.

Pujara was a part of the Asia Cup squad, but never got to play a single match — even after India were officially eliminated. The message was clear: the selection committee did not look at Pujara as a part of the long-term plan for the ODIs, especially for World Cup 2015.

If that had been the case, it did not make any sense to pick him again. He could easily have been dropped the way Ishwar Pandey (the other man who was in the squad and did not get to play a match, and is yet to make his international debut) has been left out. Not many people would have complained if an IPL power-hitter was selected ahead of Pujara.

Contrary to popular beliefs, Pujara is an astonishingly fast scorer; gifted with the rare ability to dominate short-pitched bowling, Pujara can accelerate at any level, and with 55.03, has the best List A batting average after Michael Bevan. The potential is there, and so are the numbers: is he really among a probable for the World Cup?

Let us, for once, assume that the batsmen rested for the series (Dhoni, Kohli, Dhawan, Rohit, and Jadeja) are definite picks. Dhoni and Jadeja have a second attribute to their names, but the other three will have to qualify based on their batting skills alone. Kohli auto-selects himself, but the same cannot be said for the others.

With Raina’s weakness against bounce (something the fast bowlers from across the world will only be too happy to dish out) an established fact by now India will have to look at more options (even if Rohit is, by some mysterious logic, considered a must-selection).

The surprise entry has certainly been that of Jadeja’s. Even without his twin innings (both of which were unbeaten) in New Zealand, Jadeja had played a crucial 25-ball unbeaten 33 that had sealed Champions Trophy 2013 for India; against Sri Lanka at Sabina Park, too, Jadeja he had top-scored with an unbeaten 49.

What about the others? Dhawan’s performances have been impressive, and Rohit just about makes the cut. With the World Cup being held in conditions Indians are not comfortable against, Pujara’s case is made.

One can only hope he is given a proper run, unlike in the Asia Cup. 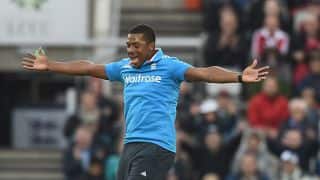 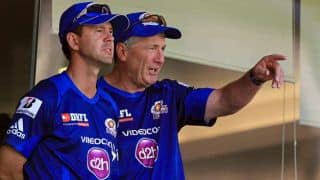 IPL 2014 eliminator: John Wright believes MI were outplayed in all departments against CSK