On December 16, 2003, India registered a memorable victory over the all-conquering Australians in their own den at Adelaide. Rahul Dravid smashed a double hundred in the first innings and followed it with an unbeaten 72 in the second to take India to victory. Nishad Pai Vaidya goes down memory lane to see how India’s cricketers celebrated Vijay Diwas on the field of play. 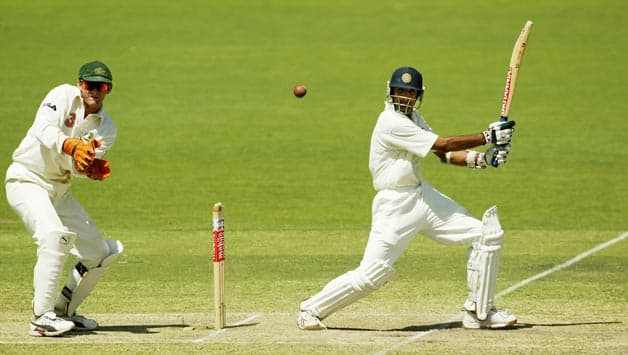 On December 16, 2003, India registered a memorable victory over the all-conquering Australians in their own den at Adelaide. Rahul Dravid smashed a double hundred in the first innings and followed it with an unbeaten 72 in the second to take India to victory. Nishad Pai Vaidya goes down memory lane to see how India’s cricketers celebrated Vijay Diwas on the field of play.

In the early 2000s, the Indian team blossomed into a force that could challenge any side in its own backyard. The inspiring leadership of Sourav Ganguly transformed the mindset of the team to shed the tag of poor travellers. The catalyst for that change however came at home when India beat Australia at Kolkata in an unbelievable clash. However, two years down the line, the firm of Rahul Dravid and VVS Laxman scripted an encore of Kolkata in Australia’s own den at Adelaide. The result as they say is history.

India were travelling to Australia with a stronger squad compared to some of their previous visits. However, they were up against the most formidable side in the world – Steve Waugh’s world-conquering Australians. Even without the likes Glenn McGrath and Shane Warne, the Aussies were still the team to beat and had enough firepower to maintain their hold over the world. Thus, the Indians weren’t given much of a chance and there were overwhelming odds stacked against them.

Going into the second Test at Adelaide, both sides had shared the spoils in the first. It was an even contest as the Indian bowling fought back and skipper Ganguly’s ton saved India from a precarious position. What it did was that it sent a message that the Indians were there to compete and not merely surrender.

Australia won the toss and chose to exploit a batting beauty at Adelaide. Ricky Ponting mammoth 242 took Australia to a huge total of 556. India had their task cut out at the Adelaide Oval when they set off on Day Two.

Virender Sehwag got India off to a flyer with Aakash Chopra holding fort at one end. But then there was a collapse as India slipped from 66 for no loss to 85 for four. Sachin Tendulkar was caught behind and Ganguly was run-out. In walked VVS Laxman to join Rahul Dravid – with the Indian fans hoping for a miracle.

The duo started constructing a level-headed partnership to resurrect India. Unlike Kolkata, this was the first innings and India had to bat long and overhaul Australia’s challenge. In the magazine Wisden Asia Cricket, VVS Laxman wrote in December 2004, “Like at Kolkata, Rahul and I told ourselves to play it over by over, be positive, and play each ball on its merit. The pitch was great for batting, and the key to playing in situations like this is not let, as far as possible, the circumstances of the match affect you batting.”

With this big knock, Dravid had effectively exorcised the ghosts of his previous tour to the country. His brilliant 233 and Laxman’s took India 148 to within 33 runs of Australia’s 556. He was the last man out with India finishing on 523. The game was very much in the balance.

If Dravid wiped off a few bad memories, another man in the Indian side was also eying redemption Down Under. A certain Ajit Agarkar suffered the ignominy of recording five consecutive ducks on India’s previous trip. On this tour, he was looking to pay back the Australians and he did it in some style. Even as Australia had the small lead on the fourth day, Agarkar produced a brilliant spell of six for 41 to dismiss the hosts for 196. India were on the verge of history with 230 to get in a little over a day to go.

Sehwag was at it again, producing his characteristic strokeful innings at the top. However, India needed the calm and temperance that is Dravid to anchor them. Even as some of the Indian batsmen such as Tendulkar and Laxman produced cameos, Dravid was intent on seeing it through. An India victory looked certain as he calmly went about his business and the other batsmen took a few liberties with his assurance at one end.

The target wasn’t going to trouble the Indians with Dravid holding firm. Tendulkar – who had a tough time in Australia – came out with intent and smashed a few boundaries during his knock of 37. Laxman was in a hurry as he scored 32 at almost a run-a-ball. These short flurries helped India inch closer and there were no real hiccups despite a few wickets falling. Dravid went about his job like a clinical surgeon.

On the fifth afternoon, Dravid cut Stuart MacGill for a four to register a six wicket victory for India. It was a beautiful moment as India’s sentinel took off his cap in genuine delight and kissed it even as the bat went up in the air. Vijay Diwas (Victory Day) is celebrated in India on December 16 and Dravid ensured that the great occasion was commemorated on the field of play.

While Kolkata 2001 would remain one of the most significant games in Indian cricket history, Adelaide 2003 comes a close second. Not only did the likes of Dravid and Agarkar redeem themselves, but India assured their fans that miracles were possible even overseas.