Rahane has recorded better numbers after seven Tests than any of his peers.

Middle-order batsman Ajinkya Rahane has emerged as one of India’s most successful batsman during the Test series against England. Devarchit Varma takes a look at the batsman’s progress since his return to the national side.

India have had a mixed, yet impressive run in England so far in the first three Test matches. While they managed to force a draw in the first Test at Trent Bridge, in the second Test at Lord’s India managed to end their winless run overseas as they thrashed England by 95 runs. However, the hosts bounced back in an impressive manner to level the series in the third Test at Southampton with a huge 266-run win.

Among the many positives that India have seen so far in the series, it is certainly heartening to see some of their frontline batsmen finally playing to their potential and making most of the opportunity. Murali Vijay is making giant strides as he has been simply excellent. Despite the failures that Shikhar Dhawan has had at the other end, Vijay has been unperturbed and has played some scintillating knocks in the series so far.

The other young guns such as Virat Kohli, Cheteshwar Pujara and Rohit Sharma might have not played as well as they would have liked, but there is one batsman who has been just terrific on this tour. Be it is match-winning century at Lord’s or fighting half-centuries against the inspired English bowling attacks at Southampton, Ajinkya Rahane is one batsman who has been a revelation for India in Test cricket, especially in the year 2014.

Rahane might have made a poor debut – against Australia in the fourth Test in New Delhi in 2013 – but Rahane ensured that he did not let go off the  opportunities that came his way. Rahane had a superb tour to South Africa wherein he proved his mettle as a Test batsman, and his good run continued on the tour to New Zealand wherein he smashed his maiden Test century – 118 against the Kiwis at Wellington.

If we compare Rahane’s record to some of the top-order Indian batsman after seven Test matches played, the result will not only be surprising but will be suffice to prove that Rahane is one batsman who has tremendous potential. Yet, he does not enjoy the huge fan base and the attention from the cricketing fraternity that some of his fellow cricketers do.

Let’s look at this table:

The table indicates that after seven Tests for India, it is Rahane who averages more than the dashing Virat Kohli, Cheteshwar Pujara and even the explosive Shikhar Dhawan. Rahane is ideally a middle-order batsman, but in this star-studded Indian batting line-up he bats majorly with the lower order batsman, and has still able to maintain such an impeccable record. 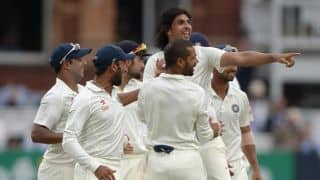