Ben Stokes has been called up for the first Test against India.

England suffered a major roadblock on their way to resurrection after their Ashes debacle with a morale-sapping loss against Sri Lanka at Headingley. The five-match Test series against India surely presents another shot at climbing up the rankings. R Vishal analyses the current England squad, Ben Stokes’ comeback and whether it can match up to the battering ram that steamrollered the Men in Blue in 2011.

The year was 2011: India were still drowning in the massive wave of national euphoria that engulfed the country after clinching the ICC World Cup 2011 on home soil. England, on the other hand had a World Cup to forget — an ignominy of a follow-up to their thumping Ashes win Down Under.

A jaded India ran into a side filled with wounded pride and a bloody minded determination to get to the summit of the International Cricket Council (ICC) Test rankings. A resounding 4-0 win rewarded them with just that. Yet again, England find themselves licking their wounds after a dramatic penultimate ball loss against Sri Lanka. What do England have in store three years down the line?

Critics and social media aficionados have dubbed the series as a battle of conservatism. Mahendra Singh Dhoni’s tactical acumen and strategies away from home has been under the scanner for a few years now. It is a stark contrast to his identity as a skipper in the shorter formats of the game though. Alastair Cook has got a fair bit of stick for his a safety-first approach as a batsman and as skipper recently.

Spin legend Shane Warne has been the torchbearer of the Cook-bashing brigade and verbal volleys have oscillated back and forth recently.  It’s now or never for the English captain. Another inept series could signal the end of the road for the Essex opener’s time as skipper.

England would certainly be fancying their chances here. Cook has feasted on the Indian bowling attack ever since his debut against this opposition. One of the biggest pluses for England from the Sri Lanka Tests is the fact that their top seven, except Cook, had a good outing with the bat. Alongside the classy Ian Bell, a batting line-up Joe Root, Gary Ballance and Moeen Ali give the hosts a formidable look. Even rookie Sam Robson now has a century to his name. They can ill-afford an inexplicable final session collapse on Day Four of the Headingley Test and would have surely learnt from the bitter experience.

James Anderson, Stuart Broad and Liam Plunkett can run through teams in the Old Blighty with ease. The team’s performance in 2011 whitewash is definitely a major psychological boost and many of the current lot of Indian batmen haven’t played  a Test match in the country. England might have missed a trick in not trying out a frontline spinner to replace Graeme Swann against Sri Lanka. Here again, they continue to bank on Moeen Ali to take that spot. They have instead included an extra all-rounder in Chris Woakes in the squad. For the short and the long term, this lack of trust with their pool of spinners in the domestic circuit is cutting into the team’s options. They also run the risk of being predictable, despite having bowlers par-excellence in Anderson and Broad in their ranks.

England’s new ray of hope and a potential great, Ben Stokes makes a comeback into the side after suffering a long injury lay-off.  Standing tall with his performances despite his teammates wiling in the Australian summer, Stokes has already been sounded out as Andrew Flintoff’s successor. A lion-hearted cricketer who is unflinching under pressure, the 23-year old will undoubtedly lift England in all areas. 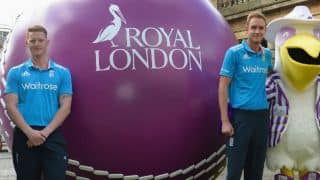