In their last nine Tests, England have tended to lose wickets in a bunch.

With their loss against India in the second Test at Lord’s, England have now failed to win nine Tests on the trot. From a team that beat Australia at home a year ago, they have become an easy mark for sides like Sri Lanka and India — who are playing in alien conditions. Shiamak Unwalla looks at the root cause of England’s woes.

They won at home, they won away, they won the Ashes, and they won in India. England were a side that were very, very tough to beat. They were the deserving Test champions, and made themselves nigh unbeatable. Fast forward to 2014: England are jaded. One of their most prolific openers retired a couple of years ago. The other, the captain, is struggling for form. Their dependable No 3 has his issues with stress and burnout. Their main batsman was thrown out of the side. The most consistent firefighter has suddenly run into a rough patch. And their wicketkeeper, who was able to turn the game on its head almost single-handedly, recently announced that he was taking a break from the game due to injury.

Perhaps the biggest reason for England’s downward spiral has been their lacklustre batting. In their last nine Tests, they have tended to lose wickets in a bunch. With seven losses in nine Tests, their winless streak is almost as bad as the one India suffered overseas in 2011-12. As seen in the table below, England have collapsed in a heap which allowed the other team take control. What this shows is that they have never been in a good position, because even a century stand could be followed by a burst of three or four quick wickets, and the advantage is immediately lost.

Even against fast-bowling attacks that are traditionally not very threatening — Sri Lanka and India in this case — the English batting has suffered. Unless they apply themselves a lot more and work very hard on their shot selection — Ishant dismissed Joe Root, Prior and Ben Stokes by making them pull — this worrying trend is likely to continue. India head into the third Test at Southampton firmly ahead, and unless England sort out their batting woes, it is unlikely that they will make a comeback in this series. Their bowlers cannot be expected to rescue them with the bat every time. 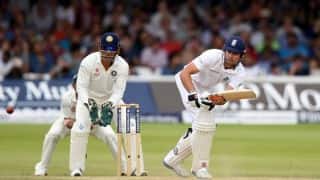