Much to the surprise of Indian fans and the critics, the Indian bowlers produced a much improved performance on the final day at Lord’s to register a win at the home of cricket in the second Test against England. Ishant Sharma was terrific on that day, but the tour has also seen Indian bowlers come out in a different manner all together. Devarchit Varma delves deeper into the see-saw performances of the Indian bowlers, and explains why it is important for them to put mind over matters.

When Ishant Sharma finished with figures of 7-74 at Lord’s on the final day of the second Test between India and England, the people on the internet were quick to highlight how irregular and inconsistent Ishant Sharma has been in his Test career. After all, only couple of months ago he had the figures of 6-51 and none for 164 in a Test match against New Zealand at Wellington. Just like Ishant’s see-saw performances in Test cricket, the Indian bowling unit has been performing here and there but not consistently. The big question for them is, can they sustain it? If yes, for how long?

Suddenly the fresh Indian bowling attack which was recently lamenting the decline of their star speedster Zaheer Khan is looking in the pink of health and most importantly, looking like the one has the potential to take 20 wickets in a Test match and win them. Surprisingly, this was the same attack that took field on the bouncy and pace-supporting wickets of South Africa and New Zealand, but it was at Lord’s where they actually came to the fore and delivered a performance that would be remembered for years to come.

Indians have never looked the bunch that has strategies. Or atleast with some plans that may actually work. Just like the happy-go-lucky cricketers from the Caribbean, Indians have played series after series without concrete plans and well-defined goals. At least this is what it looked like. They lost almost everywhere outside home and back home they have been able to register wins in Test matches and series because that is where their batsmen open up completely, and there is a continuous influx of spin bowlers who have the potential to win matches for India single-handedly.

So how did India win at Lord’s, one wonders. They won the contest both with the bat and the ball. They might have certainly chalked up a couple of strategies and plans in the build-up to the England tour, but what was important was that they executed them well, at least at Lord’s. But, if India had strategies earlier, how did Ishant Sharma continue to bowl outside the off-stump and get ridiculed the world-over for so long? If MS Dhoni had the marvellous ideas like bowling a barrage of bouncers at the English batsmen, what went wrong when a certain Jimmy Neesham teamed up with Brendon McCullum to deny India an overseas win that might as well have come a couple of months ago in New Zealand.

MS Dhoni for one would say that it was just a matter of time that this bunch of young and talented cricketers got the return of their hard work in the form of a Test match win.

The Lord’s win proves that it is not just the conditions, the pitches, the opposition, the venue that deny India overseas wins. It is also their inner demons. Ishant Sharma proved this fact by revealing that he was not at all interested in bowling bouncers when nothing was working, at all. Not even one. Dhoni insisted still and the result is what you all know. Ishant did not have the confidence or even the very idea that he could use his lanky figure and bend the back and barge in a couple of short ones when Joe Root and Moeen Ali were running away with the match.

Ishant’s self-doubts opened a can which every critic had been waiting to open. To determine why these talented cricketers were not playing up to their potential and why the world champions in 50-over format were not able to come up with ideas and performances that could help them win a Test match.

The revelation of not-willing to bowl even one bouncer proved once again that self-doubt is fast becoming an issue for the Indians. Ishant has so far been unwilling fit into the shoes of Zaheer Khan as the Indian pace spearhead. Does Ishant know that he will succeed? Does Ishant know for sure that he will fail? Do you know? Do I know?

This terrific win at Lord’s should be celebrated, but more than anything else it tells us that the ridiculed, self-doubting yet talented Indian cricketers can do a world of good for themselves if they put mind over matters.

Well done Ishant Sharma and Mahendra Singh Dhoni for scripting a win that will be remembered for generations. After all, the horrendous run in overseas Tests began in England back in 2011, and you ended it where it all started, that too with some style. 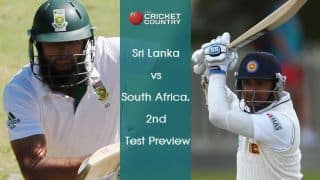