Since the sensational Test debut, Mohammed Shami has had a quiet run in Tests.

Since the sensational Test debut, Mohammed Shami has had a quiet run in the longest format, yet he has remained impressive. Abhijit Banare analyses Shami s performance in the two Tests in England so far.

With five-wicket hauls in two consecutive innings, Bhuvneshwar Kumar had hogged the limelight until Ishant Sharma bounced back to stardom at Lord s. The only pacer who is yet to make a mark is Mohammed Shami. The pacer hasn t looked out of sorts but is yet to deliver a match-winning performance since his debut. Shami has looked good in patches so far. One of the common terms heard from commentators while he is bowling is inconsistent .

Compared to Bhuvneshwar, Shami has bowled more back of length deliveries, whereas the former pitches it up more consistently. In the first innings at Lord s, Bhuvneshwar forced the batsmen to play and the swing made it all the more difficult to face him. On the other hand, Shami has created the pressure and eventually allowed the odd pitched up delivery on the legs which could be flicked away; making the batsmen feel better.

During the Lord s Test, Shami had some issues bowling with the slope. He was straying down the leg-side. Wasim Akram, while commentating for Star Sports, pointed out the importance of flicking the wrists a bit at the point of delivery which is critical in giving it the extra movement as compared to bowling it straight. Akram has been Shami s mentor since the Kolkata Knight Riders days and he made sure he gives the additional tip or two during the break. These are little nuances which Shami is sure to pick up and mature as his career progresses.

Yet, the Indian skipper has valued the pace of Shami, which the other two haven t been able to offer. It is impressive that Shami has still held his pace while coping with a tough international schedule. He looked a pale shadow of himself during the Indian Premier League (IPL). Bhuvneshwar can hit the right length, Ishant can extract the bounce off the wicket. Shami can manage both of them as he has shown in his brief Test career. Hence it s critical for him to adapt and deliver.

On a positive note, it was good for Shami to come out of the home ground shell and visit three countries ideal for pace bowling with each requiring different skill and ability to adapt to the conditions. Back when he started, everyone was all praise about Shami s seam position and ability to reverse it. A nine-for on debut for a pacer with a speed exceeding 140 raised the hopes of his countrymen. He looked impressive when he hit the deck hard in South Africa. He was much fuller in New Zealand, which fetched him wickets especially at Auckland. They key for any bowler is to adjust and adapt. And going beyond England tour, it holds true for Bhuvneshwar too. Ishant will remain an enigma. With the experience he has, things should ideally only get better for him. A successful run here will make these trio a formidable pair in the longer version. 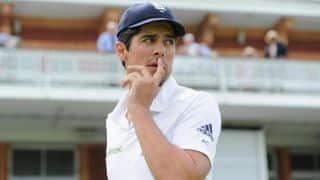 India tour of England 2014: Fake Facebook wall of England cricket team after the defeat at Lords