MS Dhoni played the ball late and looked in great touch at the crease.

MS Dhoni hit an unbeaten 50 off 64 balls on Day One of the first Test against England at Nottingham. It was an innings during which Dhoni remained positive and kept his team alive after coming in at a precarious position. Nishad Pai Vaidya writes about Dhoni’s positive approach and its importance.

The horrors of the 2011 tour loomed large as the young Indian side set foot in England. Though the hosts had their own worries, India’s inexperience in these conditions was something in favour of England. Only three men in this touring party — Mahendra Singh Dhoni, Gautam Gambhir and Ishant Sharma — have previously featured in Tests in Old Blighty. With Gambhir sitting out, Dhoni had to take onus and guide the batting when his turn came about. On Day One, he batted with a good positive approach and it bodes well for India.

Though there is a lot of talk about Murali Vijay’s ton, Dhoni’s knock was quite crucial. Walking in at a precarious position, Dhoni batted with confidence and ensured India pull through to the end of day’s play. His approach complemented Vijay well, who was cautious and picked his opportunities to score. There was a change in his technique too. Dhoni was moving his front-foot, getting into a good position and playing it very late. Batsmen who have succeeded in England have played it late, waited for the ball to move. Dhoni has adopted the right strategy for his batting.

Some of the shots Dhoni played through the off-side were evidence of his changed approach. When it was full, he drove with all the power of his wrists. A bit wide outside the off-stump and he crashed at it with aplomb. Though it isn’t the conventional technique where the batsman may only open the face of the bat, Dhoni has used all the power in his hands to adjust to the new conditions. He has clearly learnt from his errors during the previous tour, where he had a nightmarish time with the bat.

The best indicator of Dhoni’s change in approach is his strike-rate. He remained unbeaten at the end of the day with 50 off 64 balls. This is a very good rate of scoring for a Test match and such a counter attacking approach pushed England back a little bit. The fact that he played 39 dots is proof of how he balanced it. Though he was positive, he did not get carried away and blended that with some caution. In comparison, his strike-rates on the previous tour reflect his struggle and it was only during the Edgbaston Test that he played positively.

Here is a tale of Dhoni’s woes in England the last time:

Apart from Edgbaston, Dhoni was slow in all his knocks and that only put pressure on India, when they found themselves in a muddle more often than not.

At No 6, Dhoni averages 69.64 at the time of writing. He has batted there in 18 innings and already has two tons and six fifties. It is an important position for Dhoni now as India are playing with an extra bowler in the Test. Going one notch higher in the batting order certainly puts more responsibility and in this side, Dhoni is the man for the job. It is said that well begun is half done, but there is a long way to go for Dhoni and India. Nevertheless, a good confidence boost on Day One. 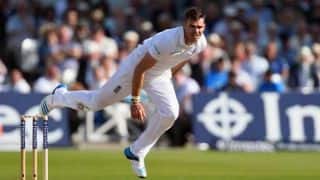 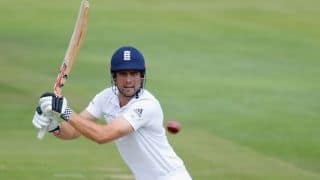