Cloudy and Gloomy weather will welcome both teams on Day Three.

Much depends on whether the Indian bowlers can get the ball to reverse, writes Arunabha Sengupta.

On Tuesday, as the two teams had warmed up for the Test, the sun had smiled upon the England players during the morning while MS Dhoni’s men were greeted by gloomy cloud cover when they came in for a hit in the afternoon.

Now, as the match enters the third day, the tale is reversed. Clouds, away on other distant errands all through Wednesday and Thursday, have returned early in the morning and at least some of them have a darker shade. It is supposed to drizzle a bit before the scheduled start and clear up by noon. But, again, the predictions have been much more fickle than the weather so far.

If there is indeed a cloud cover, the Indian seamers will be keen to exploit the same. However, one wonders how much help they will be accorded by the elements.

Clouds aside, there is a significant section of the cricketing cognoscenti who are eagerly waiting for the ball to get older. The eyes will be on Mohammed Shami and his ability to get it to reverse, much like the English bowlers did on the first day immediately after lunch. Till now, the old ball has swung considerably more than the new. It is perhaps this aspect which has led Sourav Ganguly to voice with characteristic confidence that India is going to win this Test match.

However, there are quite a few who are not so sure. The wicket is a killjoy with its sluggishness. England bat deep and with quality, with Test centurions down ton No 9. In Sam Robson, Gary Ballance and Moeen Ali they have young men with very few Tests under their belts but with impressive centuries to demonstrate their abilities. Joe Root is fresh from a double hundred. Ian Bell provides class in the middle, Matt Prior experience and spunk, while Ben Stokes and Stuart Broad combine to form one of the strongest lower middle orders. It will be anything but easy for the Indian bowlers. As Bhuvneshwar Kumar put it yesterday, patience and discipline will be the key.

The one advantage that the Indians have over their opponents is the presence of a quality spinner. Ravindra Jadeja can bowl through the day, relying on length, line and accuracy, and block one end far more effectively than the likes of Moeen. If past performances are any indicator, he can also be counted to capture a few wickets along the way.

The dry pitch and lack of movement witnessed so far has many rueing the absence of Ravichandran Ashwin from the line-up, but as we know well wisdom is easy in retrospect. That makes it important for Stuart Binny to send down some economical overs when entrusted with the ball.

It promises to be a battle of attrition. On this sort of a surface it is difficult for the action to get too flashy and exciting. However, one does expect a keen and often gripping tussle through the day. 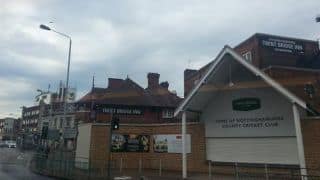 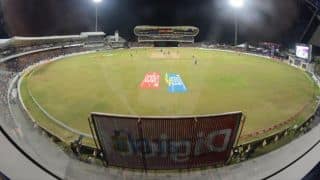