India tour of New Zealand 2014: Varun Aaron and Ishwar Pandey aim to impress with an eye on ICC World Cup 2015

India tour of New Zealand 2014: Varun Aaron and Ishwar Pandey aim to impress with an eye on ICC World Cup

Aaron and Pandey will have an eye on tickets to the next World Cup.

Go back to the ICC Champions Trophy of 2013. Throughout the tournament, India fielded a fast-bowling combination comprising Umesh Yadav, Ishant Sharma and Bhuvneshwar Kumar. Irfan Pathan and R Vinay Kumar were on the bench as the trio dominated the tournament and formed a vital cog of India’s success. Seven months down the line, Yadav and Vinay Kumar find themselves out of the one-day side and Irfan is fighting his way back from injury. As a result, the Madhya Pradesh seamer, Ishwar Pandey and the Jharkhand speedster, Varun Aaron shot through the ranks and made it into the side for the tour to New Zealand.

There has been a systemic failure in the Indian ranks to maintain a stable fast-bowling attack; leading to the emergence of numerous youngsters. While someone like a Mohammed Shami performed consistently and held on to his spot, a Jaydev Unadkat had to go back to domestic cricket for want of opportunities. Aaron and Pandey come into the side at a time when the competition for spots is intense; you cannot count Yadav and company out of the equation as a lot can change in the coming 12 months leading up to the World Cup. For now, it looks like Shami is the only one who seems to have established himself, with Bhuvneshwar coming a close second (although he was benched for a few ODIs).

At the outset, Aaron’s selection was a bit surprising as the right-armer returned to competitive cricket only this season after a two-year long battle with injuries. One can be quite sure that he himself wouldn’t have expected the call at this stage. In a chat with this writer after a Ranji Trophy game last month, Aaron said, “I have to play more games to get stronger and so that my body also gets used to it. For that to happen, I have to play four and five-day matches.” Yes, he has lasted the whole season and has been impressive. But, is it a bit too early to blood him in? Should he have been given more time to adjust his body to the rigours of cricket?

Aaron’s selection seems to be one for want of pace. Yadav is the quickest bowler in the pack, but is wayward and can be very costly in ODIs. It is that very aspect that has seen him out of the ODI side as he has a tendency to leak runs. With the hope of having a more accurate quick, Aaron has been summoned. The injuries have taken a toll on his body, but he is still sticking to his forte. Through his rehab, he made one technical change to his bowling, wherein his backfoot is now a more open during his delivery stride. Has that cut down his pace? “No changes in pace. I get a little more movement though,” says Aaron.

Pandey is a different bowler when compared to Aaron and his selection has more to do with the conditions in New Zealand. He isn’t express, but has a good outswinger and can hit the right areas. His consistency has been phenomenal as he dominated the 2012-13 season. Later, he was on the flight to South Africa to play for India A, and was one of the success stories there. Coach Lalchand Rajput called him the “find of the tour.”

In New Zealand, Pandey’s style may get tremendous help. Even if he may not have the pace, he may still be able to extract movement. Outswing would be crucial if he gets games and may have to be very accurate. In ODIs, he may still have shorter spells, but his real test would come later during the classical format, that is if he gets matches. Pandey is still working on different aspects of his game though. In an interview with the writer in September last year, he said, “I do concentrate on pace and swing. Currently, I am working on getting fitter and pace is also something I have to increase. Also, if I can swing the ball at a pace over 135 kmph, that would be good. That is what I am trying to do.”

For now, it doesn’t look likely that Aaron and Pandey would get games as they seem to be the back-ups to Ishant, Bhuvneshwar and Shami — who in all likelihood would form the bowling attack for the ODIs. The selectors have done well to pick bowlers with different strengths so that they can be ideal backups to the frontline pacers; should there be a requirement at any stage. If they do get opportunities, they need to stamp their authority to stay in the team management’s plans and keep the others out longer. They can certainly take a leaf out of Shami and Bhuvneshwar’s books. 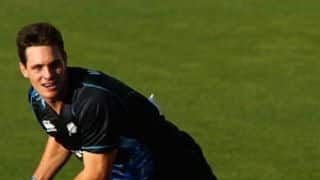 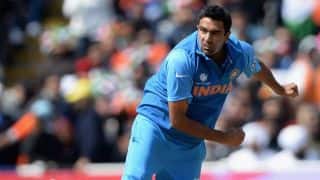