While Ashwin hasn't had success overseas, Ojha hasn't even got a chance.

Ravichandran Ashwin went wicketless in the first Test at Johannesburg and as a result, the workload on three seamers was intense. Nishad Pai Vaidya asks whether India should replace Ashwin with Pragyan Ojha for the second Test against South Africa at Durban.

Should Pragyan Ojha replace Ravichandran Ashwin for the second Test at Durban? Many believe that Ashwin has been ineffective on overseas tours and that India’s first choice spinner should make way for his cohort. In four overseas Tests so far, Ashwin had picked only nine wickets at an average of 74.77. These are astounding numbers for someone who has been India’s No 1 spinner in all formats since 2011, and a worrying factor. Perhaps India may have to rethink his role overseas as he isn’t getting the same purchase on those tracks.

Firstly, let us examine Ashwin’s overseas record. Out of the four away Tests, three have come in Australia and one was the recently concluded thriller at Johannesburg. In his very first innings in Australia, he snared three for 81 at Melbourne as India gave Australia a good fight. However, it all went downhill from there on as he went wicketless for 60 in the second innings. The next Test at Sydney was a ‘runathon’ with Michael Clarke leading the way with the triple and Ricky Ponting and Michael Hussey getting tons. He missed the Test at Perth and returned for the final game at Adelaide. Although he picked up three in the first essay, he ran into Ponting and Clarke again and was taken for 194 runs. He did slightly better with two wickets in the second innings.

The recent Johannesburg Test saw only four out of 37 wickets falling to spinners — all coming when India were trying to take charge of the game. So, the question is: Are we being too harsh on Ashwin for his overseas predicament? The tour to Australia was essentially poor for the whole Indian team and there wasn’t much for the spinners at Johannesburg. Has he been a bit unfortunate away from home? There may be a school of thought in the team management that may actually support this theory and back him to play the Durban Test. Their justification could be that Anil Kumble, India’s legendary leg-spinner didn’t do very well away from home during the first decade of his career, but in the 2000s, he was their most successful match-winner.

However, the left-armer, Ojha, may have more to offer. Unlike Ashwin, Ojha is in the classical mould and the bounce on South African wickets may actually aid his trade. Ashwin relies on his uncanny variations such as the ‘carom ball’ to do the trick. On the other hand, Ojha uses flight, length and the conventional arm-ball. He gives it a bit of air, trying to invite the batsmen to play their strokes. In the process, they may be foxed in flight and may end up misjudging the length. At Durban, he may get more bounce off that length and could be a handful. The last time round, Harbhajan Singh used the conditions well and reaped rewards.

The interesting thing to note here is that although Ojha has played more Tests than Ashwin, all his games have been in the sub-continent.  Before Ashwin’s arrival, he was Harbhajan’s understudy and didn’t play in South Africa, England and West Indies. He had one season in county cricket and had 24 wickets in four games at an average of 12.95. Yet, on the tour to England in 2011, he wasn’t given a game. After Ashwin came into the picture, he is still the second spinner, although he has matched him on most occasions in home series.

To sum up, the Ojha-Ashwin toss-up is the only real selection headache India would have before the Durban Test. Knowing Mahendra Singh Dhoni’s tendency to back his players, it looks like Ashwin could continue as they want  him to come good. There are arguments for Ojha’s inclusion and it may make sense. But, India cannot afford to have a spinner who struggles as the three seamers have a lot to do. If one of the fast-bowlers also has a bad game, then you are effectively left with two bowlers.

In a way, it is a boon that India have two spinners of note, so much so that, the bowler who gets 10 wickets in his last Test has to sit out from the next. But when will Ojha get his chances overseas? 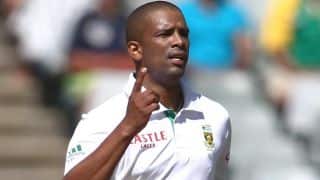