India's young brigade can return from South Africa with their heads held high.

India eventually lost the Durban Test, and with it the series, to South Africa. For all of India’s unexpectedly spirited resistance, when the end came, it seemed inevitable. Their favoured hosts could afford the luxury of conservative tactics in a rain hit match, refusing to declare even when they were eight down with a huge lead on Day 4. They knew they would get India and so they did. But, unlike the debacle of 8-0 in England and Australia, this time India won many hearts.

Let’s face it, next to nobody gave India a chance at even competing with South Africa prior to the tour. And the One-Day International (ODI) series that preceded the two Tests seemed to confirm fears of India’s weakness against pace and bounce and made a 2-0 outcome in the Test series look like a virtual certainty. If South Africa’s verbal jabs before the series smacked of arrogance, they were also based on numbers to a large extent.

The number of Tests played by the entire top six of this Indian team falls well short of Virender Sehwag’s match tally. And of these batsmen, only Cheteshwar Pujara and Murali Vijay have had a look at South Africa before. Neither of them had a successful outing on that occasion (the 2010-11 series). Unable to plan the transition from the era of the Big Four smoothly, the selectors had ended up sending a raw, young batting line up to South Africa… ripe for a slaughter.

Instead, four of the six batsmen struck half centuries and the two who could not convert these to centuries – Vijay and Ajinkya Rahane – did not fall short by much. Pujara and Virat Kohli have already begun to acquire a heartening aura of reliability and assurance. At the close of Day 4 at Durban, fans felt quite hopeful that Kohli and Pujara would weather the storm and help India fight out a draw. Their early departure on the last day likewise seemed to kill the hopes of most. While Shikhar Dhawan and Rohit Sharma were sadly very far from impressive, overall the batting line-up has more than exceeded expectations, exceeding 200 in all four innings they played in the series (just ask England how incredibly hard that can be).

The bowling meanwhile remains a chronic weakness. After an impressive first innings display in the first Test at Johannesburg, the bowling attack was thoroughly sorted out by South Africa and sent on a gruesome leather hunt. In the next two innings, South Africa mounted a staggering 950 runs without the loss of 20 wickets. Sounds familiar? A silver lining emerged though, by way of Ravindra Jadeja’s six-wicket haul at Durban. While it would be way too early to say Indian spin bowling is in safe hands, Jadeja has made a truly impressive start for sure.

Nevertheless, a likely victory turned into a close shave at Johannesburg and a likely draw at Durban into a ten wicket defeat. This series defeat extends India’s overseas drought. Not only have they lost three series in a row abroad, they have not won any of the ten Tests played across these series.

One hopes India would still draw positives from a series which had them punching above their weight just to lock step with the South Africans. It should boost their confidence for the upcoming tour of New Zealand. Besides, given the way the Ashes 2013-14 has unfolded, they may just face a brand new English team in June 2014!

(Madan Mohan is a 28 year old chartered accountant from Mumbai.   The writing bug bit him when he was 8 and to date, he has not been cured of it.  He loves music, cricket, tennis and cinema and writing on cricket is like the icing on the cake.  He also writes a blog if he is not feeling too lazy at http://rothrocks.wordpress.com/) 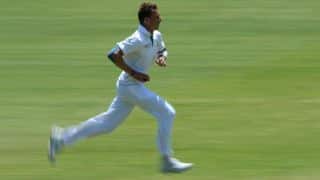