Pujara's 132 has come at a time when people were just beginning to undermine his importance in this Indian line-up.

Imagine being in Cheteshwar Pujara s shoes in the lead-up to the Test series in England. Pujara’s overseas credentials were questioned. The way he bats has come under the scanner. He is being appreciated for being the sponge that absorbs pressure, and yet is reminded of his scoring rate.

His record in England in nothing to brag about. He didn t have a good country season either averaging 14.33 in six four-day matches. When Pujara gets run out, his coach thinks he’s running like Usain Bolt. He faces 54 balls to get off the mark in an innings and ends up scoring 50 in a dead rubber that goes unnoticed in the euphoria of India winning a Test. If that’s doesn’t suffice, here’s the deal-breaker. Pujara thinks his place in the team is secured, but finds himself missing from the Playing XI the very next match.

Needless to say, being Pujara has lately been a little rough.

Skip forward to the third day of the Trent Bridge Test. Pujara and Virat Kohli walk out with the ambition of not losing a wicket. By the end, not only do they attain the goal successfully, they play out a wicketless session. Kohli looks assured. He has looked so by a long shot this series. But what a wonderful, rare sight it was seeing Pujara scoring briskly, albeit briefly, making for one of day’s premier highlights.

Let’s move further to the second day of the Southampton Test. At the Ageas Bowl, Pujara is found in a different zone. For a change, the focus is not on Kohli. He is out for 46. Pujara is at the bowlers end, watching wickets fall in a heap. Ajinkya Rahane, Hardik Pandya, Rishabh Pant, R Ashwin have all come and gone, and from a position of 142/2, India have slipped to 195/8. With India giving away wickets to Moeen Ali, it s almost Southampton from four years ago.

The only difference however, is Pujara, holding his ground and doing what he does best, grinding and trying to prove a point. As the dust settles, he brings up a bloody special hundred, at a time when the Indian innings needed something to hold on to, and someone that was not Kohli. The importance of Pujara s innings can be measured by the fact that without it, India were done, their series hopes erased. The sight of Pujara carrying his bat was not new. He did it back in 2015. But this one was way sweeter, against all odds. At a time when people were just beginning to undermine his importance in this Indian line-up.

It took Pujara 45 Tests to register his first century outside Asia since 2013. 2013, when MS Dhoni was the Indian captain and Zaheer Khan was still leading the Indian pace attack. And while over the next five years, Pujara went on to establish himself as the linchpin of the Indian batting middle order in Tests along with Kohli, his overseas numbers would always pull him down. Since the 153 he scored in South Africa almost five years ago, Pujara in Tests averaged 15 in New Zealand, 22.2 in England, 33.5 in Australia and 16.6 against South Africa (in three Tests earlier this year). England 2018 was perhaps just another failure waiting in the wings. He wasn’t included in the team for the Edgbaston Test. How? Why? We’ll never know.

From the moment Pujara walked to bat at Lord s, everything looked different. Even when he got run out there, or played the so-called uncharacteristic pull shot that he got out to at Trent Bridge, Pujara looked the most confident Indian batsman after Kohli. His footwork, his eyes following the ball, the use of the dead bat. It was almost as if Pujara was what every Indian batsmen India needed to be at that moment.

What stood out about Pujara s unbeaten knock on Friday were the two facets of his batting, one while batting with Kohli and the other when he was batting with the tail. First, during his 92-run partnership with Kohli, Pujara was being his vintage self. His first three runs took 30 deliveries, despite not entering the proverbial ‘shell’. Once Kohli settled in, and India motored along. The fierce cuts came out. It was a pleasant change to see Pujara apply force behind shots.

Then, the way he marshalled the tail, the last two batsmen, Ishant Sharma and Jasprit Bumrah, with whom Pujara put 32 and 46 to put India s nose ahead when it looked unthinkable. From taking 36 balls to secure his first boundary, Pujara went to score three in 10 deliveries. More than the tail, Pujara s stubborn approach was what brought down England mentally. James Anderson, operating round the wicket, tried to lure Pujara to play the pull. He never did. A tired Anderson was taken out.

Stuart Broad was hit for consecutive fours one that had a T20 shot written all over it, and Sam Curran, in order to make Pujara to go hard outside off, ended up a drifting a bit too wide on couple occasions. England were frustrated, while Pujara was just the opposite. He ran between wickets like he does in the outfield, ensuring he retained strike and even lofted Ali and Adil Rashid for boundaries down the ground.

In his innings were to be put in the terminology of professional wrestling, Pujara wrestled a five-star match. He started off with a collar and elbow tie up, locked in the submission, survived the opposition s comeback, hit the finisher (a 15th Test hundred) and was even able to launch a post-match assault. Whether he wins or not is too early a call.

Here s a personal Pujara memory: During India s 2014 tour of England, this writer had written a blog titled: “Will Southampton witness a Pujara special?”, following his match tallies of 93 and 71 at Nottingham and Lord s. And even though it didn t quite turn out the way it was envisioned back then, watching the prediction come true four years later is quite pleasing.

Pujara is a rare oddity. At a time where Test batsmen are stuck in T20 mode, this guy likes to be in his zone undisturbed. He can’t muscle his way to a score. But he can bat, and bat long. This Pujara innings is one of the best seen by an Indian in recent times, adding to the allure of an already fascinating Test series. So it s about time we give the man the respect he deserves. Bat on, Che. You re due for many more. 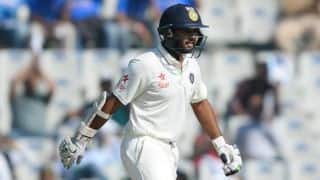 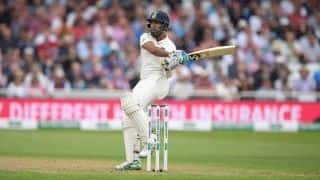