India resumed the day on a secure 369 for five.

Day Four of the first Test between and India and Australia saw some exciting, aggressive, and skilful cricket. While Australia ended the day firmly in command, India had their moments as well. Shiamak Unwalla looks at some of the highlights of the day.

India cleaned out early: India resumed the day on a secure 369 for five. Virat Kohli’s dismissal in the dying moments of Day Three swung the balance back in Australia’s favour, though one felt that Rohit Sharma and Wriddhiman Saha could potentially take India to safety. However, once Rohit gave Nathan Lyon a return catch after adding just 10 runs to his overnight total, things went south for India quite rapidly and they were bowled out for only 444.

Mohammed Shami’s entertaining cameo: Mohammed Shami walked out to bat at 406 for seven and made his intentions known from the start, slashing the first ball he faced for four through point. He then tried to take on Nathan Lyon, but ended up offering a catch to Peter Siddle in the deep. Luckily for him, it was dropped and subsequently went for four. Shami hit one more four and a superb six off Siddle before being the last man out for a thoroughly entertaining slog-filled 34.

David Warner’s nine lives: Warner — who scored a powerful, emotional 145 in the first innings —came up with another century in the second innings. However unlike in the first innings, his knock here was full of chances. After being bowled when on 63, he was adjudged not out to a caught-behind appeal that perhaps could have gone either way, and was later dropped on 89. Warner proceeded to hit his second hundred of the match.

On-field spats: After a remarkably well-spirited first three days, a bit of the old India-Australia fire came to the fore on two occasions. Warner was bowled by Varun Aaron off a no-ball, and returned to resume his innings. However, he made a few comments to Aaron that did not sit well with him or Shikhar Dhawan, who then went and gestured toward Warner and had a few words at his own. It was left to Virat Kohli — of all people! — to calm down both sides when he went and had a friendly word with Warner.

However, Kohli was soon on the other side of a few heated words. Rohit Sharma bowled  to Steven Smith and appealed for a non-existent LBW chance which was duly turned down by the umpire. Smith, perhaps bemused by the absurdity of the appeal, shrugged at Rohit as if to suggest that it was ludicrous. Rohit responded by aggressively shrugging back. Kohli was soon into the action as well, an was heard on the stump mike telling Smith, “Stay within your limits.”

Varun Aaron and Shami kick it up a notch: After the first on-field incident, Aaron was sufficiently fired up. He steamed in and bowled at furious pace, notching up speeds in excess of 145 kmph regularly, and occasionally even going past 150 kmph. From the other end, Shami started to find the elusive reverse swing that had evaded the Indians throughout the match. The pair accounted for Shane Watson and Michael Clarke, but could well have got a few more wickets as well. It was, without doubt, the best spell of pace bowling seen from India all match.

Steven Smith and Mitchell Marsh bring out the big hits: Mitchell Marsh showed that he was a man to watch out for when he hit Dale Steyn for three consecutive sixes in an ODI earlier in the year. He showed his big-hitting abilities again when he launched into a hapless Karn Sharma, hitting the leggie for three sixes and a four in an over. He was dismissed for 40 off 26 balls, and his innings injected some impetus into the Australian total. Meanwhile, Smith continued from where he left off in the first innings, hitting five boundaries en route to his unbeaten 64-ball 52 to ensure the Australian lead swelled past 360. 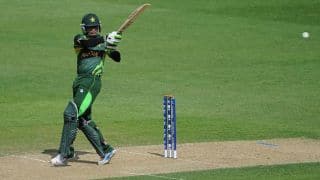