Both India and Australia had their moments on a hard fought 3rde Day.

We had a hard fought Day three of the first Test between and India and Australia. Both teams had their moments. Shiamak Unwalla finds out the major highlights of the day.

Shikhar Dhawan explodes at the start: Mitchell Johnson steamed in with the new ball to start the day, and all eyes were on how Shikhar Dhawan would cope with his pace and bounce. Dhawan replied in unbelievable fashion. He got an inside edge first ball that would have resulted in a superb catch if the diving Brad Haddin had held on to it. Thus reprieved, he went on to hit three boundaries in the first over he faced off Johnson! He hit another couple of boundaries before being cleaned up by Ryan Harris. However, the early impetus he provided set the tone for the rest of the day.

Murali Vijay and Cheteshwar Pujara set things up: After Dhawan’s early burst, Vijay and Pujara set things up with a determined 81-run stand. They were both solid, and added runs at a decent clip as well. Vijay took on Nathan Lyon, probably Australia’s most threatening bowler on the day, hitting him for two sixes and a four in the space of five balls and looked set for a big total before edging behind at the stroke of Lunch. Pujara looked set for a huge score as well before being dismissed in freak fashion; he played a forward defensive shot which found the inside edge  and went on to the stumps.

The bouncer: The fall of Vijay’s wicket brought in Virat Kohli. Johnson — with his tail up at having just dismissed Vijay — let rip a short, sharp delivery that struck Kohli bang in the middle of his helmet. The bowler, fielders, and even umpires immediately rushed to his side to make sure he was okay, Australian skipper Michael Clarke among them. He was then seeing talking to Johnson, who was visibly upset, and pacifying him. Johnson did not bowl short again till late in the day.

Virat Kohli leads the way: The term “a captain’s innings” has a tendency to be used loosely, but the 115-run innings Kohli played today fits the description perfectly. Having been struck on the helmet first ball, Kohli punched one down the ground in the same over to get off the mark. He proceeded to play an innings of tremendous class, hitting 12 boundaries along the way. His dismissal in the dying moments of the day helped Australia claw their way back into the match, though he ensured India were in a commanding position for most of the day.

Ajinkya Rahane’s brisk innings and Nathan Lyon’s deadly delivery: Rahane tried an expansive sweep off the second ball he faced, and missed it entirely. He was lucky to survive, and seemed nervy for a large part of his initial innings. Once he settled down, though, he hit boundaries almost at will. He got to his fifty off 61 balls. Just as he too looked set for a big knock, Lyon produced perhaps the ball of the match. He had looked dangerous all day, and delivered a particularly menacing over to Rahane to soften him up before sending down the nightmare ball: it kicked up off a length and bounced almost up to his forearm. Rahane did everything right; he rocked onto the back foot and softened his grip, but the ball bounced high enough to go off his glove and balloon to Shane Watson at slip.

Wriddhiman Saha’s encouraging start: Coming in to bat with less than three overs remaining is never enjoyable; more so when the batsman in question is playing his first Test in over two years. Saha, who last played a Test on this very ground in 2012, found himself in this very position. Facing a resurgent Johnson, Saha left brilliantly and looked at ease against a hostile spell of short bowling from Johnson, who by this point seemed to have got over hitting Kohli’s helmet earlier in the day. With Rohit Sharma at the other end, India could yet be hoping for a first-innings lead. 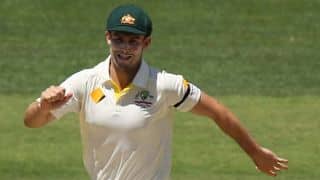