India lost the first One-Day International (ODI) against Australia by a huge margin of 72 runs. The major difference between the teams was in their fast-bowling department. The batting also was not up to the mark, but for the famed line-up it was just a blip. Shrikant Shankar writes why the Indian seamers need to buck up if they are to turn the tide on the Australians. 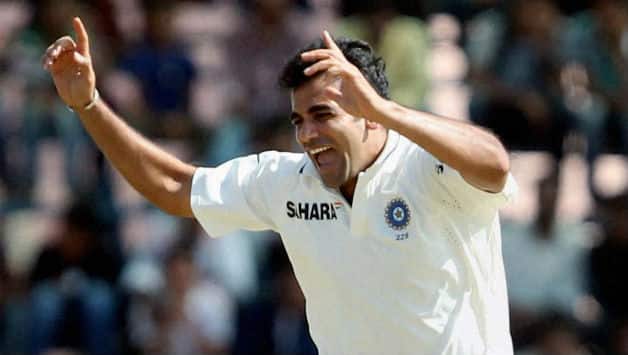 After his three-wicket burst in 11 balls against West Indies A, Zaheer Khan could make a surprise return into the Indian team © PTI

India lost the first One-Day International (ODI) against Australia by a huge margin of 72 runs. The major difference between the teams was in their fast-bowling department. The batting also was not up to the mark, but for the famed line-up it was just a blip. Shrikant Shankar writes why the Indian seamers need to buck up if they are to turn the tide on the Australians.
It is no mystery that India’s quicker bowlers will always be second-best when compared to Australia’s. This was evident when the sides met in the first One-Day International (ODI) in Pune on Sunday. The pitches for the seven-match series were always going to be batsman-friendly. The one-off Twenty20 International (T20I) had both sides scoring in excess of 200 runs. Australia scored a challenging 304 for eight in the first ODI. Aaron Finch (72) and George Bailey (85) got big half-centuries and there were healthy contributions from Phil Hughes (47), Glenn Maxwell (31) and James Faulkner (27).

India’s top-order played well with Rohit Sharma (42), Virat Kohli (61) and Suresh Raina (39) getting some runs. The batting after that was nothing to talk about. India were bowled out for 232 and Australia won by 72 runs. So, where was the difference? The obvious answer is the batting. But here is where one needs to look at the other aspect of the Indian team’s performance. How come Australia’s bowlers restricted India’s famed batting line-up and India’s could not stop an inexperienced Aussie batting line-up?

The batting failure can be considered as a one-off. It is not often that the Indian batting does not turn up, especially on home soil. It is the bowling, especially the fast-bowling department that is likely to fail yet again. India captain MS Dhoni himself said that they lack genuine fast bowlers, but have swing bowlers. But that is no excuse for the bowlers not getting something off the pitch. Mitchell Johnson bowled at speeds exceeding 150 kmph, but the rest — Clint McKay, Faulkner and Shane Watson — are not that fast. Yet they accounted for seven wickets, while India’s quicker bowlers got just two.

Bhuvneshwar Kumar went wicket-less, though, he was not as expensive as Vinay Kumar and Ishant Sharma. Bhuvneshwar will never be a fast bowler, only a swing bowler. Vinay Kumar does not do enough with the ball off the pitch or in the air. Ishant has lost a little zip that he had in his earlier days. He might have turned the ICC Champions Trophy 2013 final in India’s favour, but that can be attributed more to England’s famous ability to choke in big finals. India’s squad has two more seamers in Jaydev Unadkat and Shami Ahmed.

Neither of the bowlers will instill fear in Australia’s batsmen, but at least Unadkat can offer something different. With three right-arm seamers, the Indian attack seemed too similar. Unadkat is a left-handed bowler and his inclusion will add some variety to the bowling attack. Shami Ahmed has not impressed enough in the 11 matches he has played so far for the country. While he has been economical, his return has been only 10 wickets. Whatever the combination, the quicker bowlers need to pull up their socks. The spin department seems to be balanced and doing well for now.
A sign of hope

While it does seem that the Indian seamers will struggle for the next two matches, the squad for the final four ODIs is yet to be announced. After his three-wicket burst in 11 balls against West Indies A, Zaheer Khan could make a surprise return into the Indian team. His four wickets in the second innings helped India A beat the Caribbean outfit and level the three-match series 1-1. Zaheer has always been a quality bowler. He may no longer be capable of bowling above 140 kmph, but he is probably the only bowler who can trouble any batsman in world cricket without pace.

Zaheer has been out of the Indian side for a while now and people have already written him off. But history says that Zaheer comes back stronger after being dropped. The reason why his being included in the Indian side is necessary is that Ishant has not exactly taken over as the main strike bowler, especially after playing international cricket for more than six years. It is imperative that Zaheer returns to guide the newcomers. There are important Test series that await India away from home in the near future and the young bowling attack would need someone like a Zaheer to lead them.

All is not bleak for India in this ODI series. But as always it might come down to the batting, which will have to pull India through. Australia’s bowling is far superior to India’s when it comes to the quicker bowlers. But the Indians have to stake their claim and improve as a unit and look to unsettle the Australian batsmen. And they have to do it in the very next ODI in Jaipur on Wednesday. Or they will be chasing shadows.