Captain Cool Mahendra Singh Dhoni and local boy Ravichandran Ashwin’s riveting performances helped India trump Australia in the first Test at Chennai. While the two stellar performances may have stolen the limelight, it was a team-effort with the others chipping in with vital contributions at critical junctures. 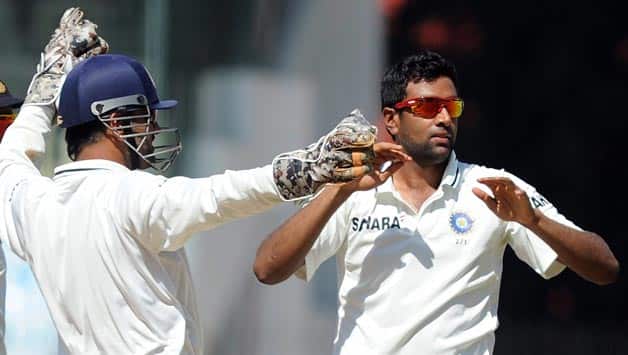 Captain Cool Mahendra Singh Dhoni and local boy Ravichandran Ashwin’s riveting performances helped India trump Australia in the first Test at Chennai. While the two stellar performances may have stolen the limelight, it was a team-effort with the others chipping in with vital contributions at critical junctures. With the exception of the openers and the new ball bowlers (who weren’t used a lot), Dhoni can say that they struck form as a unit to emerge victorious. Let us review the performances of each member of the Indian eleven from the first Test at Chennai:

Murali Vijay: After years of being an understudy, he finally has a chance of cementing his spot in the long run. However, the flashy right-hander failed to impress on his home ground as he fell early in both innings. Perhaps his dismissal in the first essay was most disappointing as he there was minimal footwork to a full-pitched delivery. The next Test is crucial for him as he can ill-afford another poor outing. Shikhar Dhawan and Ajinkya Rahane are waiting for their shot at the top.

Virender Sehwag: His first international outing in spectacles in a new armour didn’t go too well. Luck did not favour him in the first innings as the ball bounced on the stumps; on other days it would have easily gone over. When it looked like he was getting into his stride during the small run-chase, Nathan Lyon induced an edge as he defended. There is pressure on Sehwag keeping Gautam Gambhir’s axing in perspective, but as Mahendra Singh Dhoni said the opener deserves more time.

Cheteshwar Pujara: With each passing game, Pujara assures the team management of his solidity at No 3. His knock of 44 in the first innings may have been eclipsed by Dhoni, Virat Kohli and Sachin Tendulkar’s performances, but there is no denying its importance. At 12 for two, things were looking iffy and Pujara played positively to help India out of that hole. That approach complemented Tendulkar’s dominating intent and set a platform for the lower middle-order.

Sachin Tendulkar: Indian cricket fans would breathe a huge sigh of relief as the maestro returned to his elements with a fantastic performance. Having put in the hard yards in domestic cricket, he looked in good touch and these are ominous signs for Australia. The thing that stood out was his positive mindset. In the first innings he started off with two fours to pump life into the Indian charge after two early blows. As if wanting to make a statement, hen then carted for two sixes in the second innings. The master looks dangerous — and hungry.

Virat Kohli: With all the focus on Tendulkar, Kohli quietly worked his way to a fifty. It was a measured knock, with minimal risks and maximum class. One almost didn’t notice him racing to a fifty and that reflects the ease with which he played. Along with Dhoni, he counter-attacked and changed the balance of things. The only blemish was the rash stroke that cost him his wicket after the hundred. Kohli is one player whose burning desire allows him to amend his mistakes soon and he will ensure he doesn’t err again.

Mahendra Singh Dhoni: An epic innings which effectively shut his critics. It was a knock that would be remembered for a long time as Dhoni’s performance bludgeoned the Aussies into submission and seized control of the game. A lot has been written or said about the knock and that in itself isn’t enough to illustrate its importance in a tough setting. Even Michael Clarke couldn’t deny the value of this power performance.

Ravindra Jadeja: On a tricky Chennai wicket, his bowling was difficult to contend with as he gets some to turn and the other go straight through. His wicket of Phil Hughes in the second innings was a stand-out as it kicked off the rough and climbed on the batsman, who was fending as if he was playing a fast-bowler. Jadeja’s batting was a bit disappointing as he let a James Pattinson delivery go through to the stumps.

Ravichandran Ashwin: Celebrated his home-coming with a match-winning spell. Coming into this series at the back of a tough outing against England, Ashwin needed to rediscover his magic. Being a thinking cricketer, he put in a lot of thought into his bowling. He wasn’t afraid to give it air and set up a few batsmen beautifully. The 12 wickets is a just reward for his tremendous application and for learning from his past mistakes.

Harbhajan Singh: It wasn’t a performance he would have wanted for his 100th Test. Nevertheless, he improved as the game progressed and might just have extended his stay in the eleven. He bowled with more craft and guile in the second innings and has the wickets of David Warner and Matthew Wade to show.

Bhuvneshwar Kumar:  Did not have much of a bowl as the spinners ruled the roost on the turner. His efforts with the bat were lauded as it helped extend India’s lead. A patient hand at one end helped Dhoni to play his natural game at the other. Bhuvneshwar showed that there is a lot more to his game than just getting the ball to move in the air. A First-Class average around 30 shows he is more than a decent batsman.

Ishant Sharma: There wasn’t much he could have done on the wicket at Chennai. He would hope for more assistance at Hyderabad to make his mark in the series.