The problem with Shami is that the bad balls usually outnumber the good.

Mohammed Shami took five for 112 — his second fifer in Tests — in the fourth and final Test against Australia at Sydney. He is now the second-highest wicket-taker in the series, but his wickets have come at a cost. Shiamak Unwalla wonders how Shami ends up taking so many wickets.

Mohammed Shami had bowled the first delivery of the India-Australia series at the Adelaide Oval. It was full, quick, and swinging in. His first over cost just two runs. The first two balls of his next over went for boundaries. There was a third four later in the over. He ended up conceding 120 runs at five an over. After being largely ineffective, he came in and got rid of Nathan Lyon and Brad Haddin toward the end of the day. He took no more wickets in the innings. He cleaned up Shane Watson with a full, swinging delivery in the second innings.

He was dropped from the second Test, but came back for the third at the Melbourne Cricket Ground (MCG), where he took four in the first innings: Chris Rogers edged one lazily behind, Shaun Marsh tried to cut one off the front foot and edged behind, Brad Haddin tried to leave the ball but was a bit late in doing so as the ball took the bottom edge, and Nathan Lyon was bowled trying to slog. Shami himself could not take credit in any of the four wickets. In fact, he was probably the worst bowler on display, spraying the ball short and wide repeatedly. He better in the second innings, and took two tail-end wickets as well.

His five wickets in the first innings of the fourth Test at Sydney Cricket Ground (SCG) were similarly fortuitous; the batsmen obliged with poor shots or over-aggression after they had already collected a commanding total. Shami was once again there to pick up free wickets. He was rewarded for putting the ball in the right areas; but the problem is, and has been throughout the series, that the consistent overs were sandwiched between abysmal ones.

The problem with Shami is not that he is a bad bowler. He is fairly quick, he gets the ball to move, and can be quite a handful when on song. The problem with Shami is that the bad balls usually outnumber the good. He can be relied upon for the occasional unplayable delivery, but can equally be relied on to send down some short, wide swill that will go for plenty. As a batsman, the good deliveries are easy to keep out since there is likely to be a boundary or two on offer sooner rather than later. Shami must find the consistency to bowl one over exactly where and how he wants to. Till that time, he will be doomed to mediocrity. 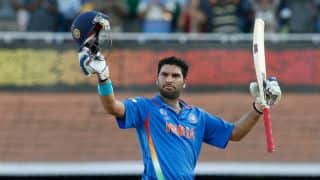