Sexism, at the end of the day, takes away from the beautiful game.

The build-up for the series between India and Australia has been immense. As the series finally gets going, Sayantani Adhikary explains why the punch-lines have been politically incorrect.

The India-Australia Test series will be underway by the time you are reading this article following the delay caused by the unfortunate demise of Phillip Hughes. The Indian cricket team undoubtedly would love to better their record in Australia, especially after their dismal 2011-12 rout.

As the nation awaits with baited breath for the Test series to begin, it is also the time for the media to up the ante and create a sort of hype around the forthcoming series. As a result we get to see, to know how this would be the ‘Final Frontier’ that the team need to conquer (not really, mind you, they are yet to beat South Africa at their den; when Steve Waugh had uttered the same phrase over a decade back it was after Australia were through beating everyone else — and they had won three series in India when he had said that).

But more importantly, the general tone is that this tour will help distinguish the men from the boys. Wait, what? This is not the Under-19s or Under-16s teams we are talking about, correct? Then what do we mean by that clichéd phrase? The last time I checked, it was the 21st century, and yet we are at a loss to find any other adjectives to describe the serious challenge this tour promises to the 20-something men (the youngest member of the team being KL Rahul, age 22) at the least?

Unfortunately, this is how cricket, or in a broader note, sport, has always been represented. It had started as the gentleman’s game (the term was more elitist than sexist, but obviously, no one back then could have imagined in their wildest dreams that women ladies are capable of taking part in cricket in any way — let alone actually playing it).

But that was a different era. We have moved on. Or we should have, at least. Women have been taking part in international cricket since 1934, while the first recorded match between two teams of maids (yes, you heard me right) took place in England in July 26, 1745.

Obviously, the space in question does not belong exclusively to men, anymore. Yet we fail to get rid of the stinking sexism that is so blatantly present in the fields amidst the audience and even in media representation. How many times have we read in a match report that someone, or the other played ‘like a man’ under a tough condition? How many times have we cringed to have read something as ‘the batsman de-robed the bowling attack’?

I kid you not. These phrases have been used quite frequently by eminent writer. Victory and defeat, pride and shame, toughness and fragility associated with sport are, more often than not, described in terms of the masculine and feminine binaries.

Therefore, a good batting performance invariably comes to be described something appropriate for a man, whereas a lacklustre bowling side is declared to be ‘raped’ by the more ‘masculine’ (read dominant) side. Of course, thanks to the societal mindset in this part of the world and going by the findings from the recent events, we know rape is less about forced sex and more about controlling dominating a weaker person in submission by physical force.

Indeed, whenever someone uses blatantly misogynist terms to describe a game, the person gives expressions to the subdued ambition of domination and conquering that is a fundamental part of the patriarchal society. Thus, when in sports journalism, the need is for ‘frail heroes’ (a term borrowed from Indira Chowdhury, who wrote about the binary colonial concept of masculinity and femininity) or ‘boys’ to ‘man up’ to the occasion.

After all, India need to beat the Australians — a ‘manly’ lot (what with their sledging, playing the sport the hard way, unleashing bouncers, and not giving up till the end — activities that have been associated with masculinity and dominance since time immemorial).

Such phrases highlight how patriarchy extends its control over minds of individuals. At times, these individuals remain oddly unconscious of the presence of sexism in their works.  So, next time you are reading a match report or listening to the commentary, keep in mind that whoever wins  or goes down fighting is the man, while the defeated is no more than a boy or a woman, blessed with skills and guile, yet not brave or strong enough to win.

Sexism, at the end of the day, takes away from the beautiful game. As they rightly say, it is just not cricket!

(Sayantani Adhikary is a PhD student in the department of History, Jadavpur University. An avid sports follower, cricket remains one of her favourites.) 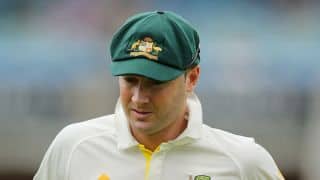