India vs Australia 2014: Visitors would do well to back aggression up with performances

India vs Australia 2014: Visitors would do well to back aggression up with performances

India have been more antagonistic and “in-your-face” than their Australian counterparts in both Tests.

India have been the more aggressive team of the ongoing series in Australia; they have been brasher and have invariably mouthed off to the Australians. However, while the intent has been there for all to see, their execution has gone awry. Shiamak Unwalla feels that unless they can walk the talk, they would do better to stay mum.

India have not been a peaceful side on this tour so far. In the first Test, there was the on-field spat between David Warner and Varun Aaron, in which Shikhar Dhawan played a part as well. Later, on the same day, Virat Kohli, Rohit Sharma, and Steven Smith had an argument as well, which culminated in Kohli telling Smith, “Stay within your limits.” India fought hard in the match, but none apart from Murali Vijay and Kohli managed to score any runs in the fourth innings as India folded 49 runs short of a win.

In the second Test, Rohit was heard taunting Mitchell Johnson when the latter came in to bat at 247 for six. “How many wickets did you take on this track,” Rohit had inquired of Johnson. He was (why?) reminding Big Mitch of his inability to take a single Indian wicket in the first innings. By the time Johnson was done, he had outscored Rohit in the series with a single innings, and bowled a spell that broke India’s back on the fourth morning.

VVS Laxman — few have handled Australians better than him — knew exactly what was wrong. He was one of the first candid Indian voices to come up with a relevant tweet:

India have been more antagonistic and “in-your-face” than their Australian counterparts in both Tests, but it has not worked for them on either occasion. Indeed, Rohit’s goading of Johnson in the second Test might well have caused the carnage that followed. What is worrying is that, having poked the bear, India had no answer to the impeding backlash. A bit of within-limits on-field chatter makes the sport more interesting; indeed, Watson and Dhawan seemed to have a cordial chat during lunch on Day Four, but one can assume that it remained civil.

Nonetheless, unless India manage to back up their aggression with dominating performances, it will be difficult to see their bravado as nothing more than empty showmanship. When Kohli came in to bat during India’s second innings in the first Test at Adelaide, Brad Haddin could be heard saying something to the effect of, “we’ve all seen his [Kohli’s] true colours.” Kohli did not respond immediately, but instead went on to compile a nearly match-winning century. He celebrated his landmark emphatically, and truly did show his colours.

One feels that runs and wickets will serve a greater purpose to India’s cause than empty machismo on the field. The third Test at MCG will be a good opportunity for India to start afresh and let their bat and ball back up their comments — which will, in all probability — be aimed at people other than Johnson! 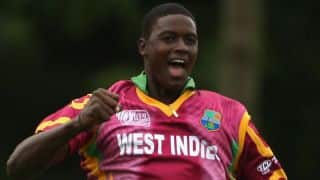 South Africa vs West Indies 2014-15: Is Jason Holder a captain or a stooge? 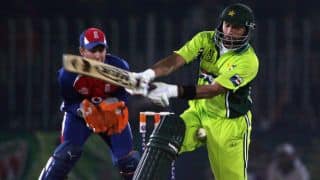 Shahid Afridi, please do not take the innocence away from cricket