The Indian cricket team would like to make amends and level the ongoing five-match One-Day International (ODI) series against Australia.

The Indian cricket team would like to make amends and level the ongoing five-match One-Day International (ODI) series against Australia, in the second match at the Gabba in Brisbane. Like 2015, India began their 2016 on a losing note with Rohit Sharma getting centuries in both the matches against Australia. Indian batsmen did very well in the first ODI at Perth, with Rohit smashing a record 171 not out and Virat Kohli getting his first half-century against Australia at their backyard. But it was India’s bowling department which let down the team as Australia sauntered to a five-wicket win to take a 1-0 lead. FULL CRICKET SCORECARD: India vs Australia 2015-16, 2nd ODI at Brisbane

India would be ruing that their star bowler Mohammed Shami — who was so impressive for them in the ICC Cricket World Cup 2015 — was ruled out for this tour. Shami had travelled with the team but was ruled out of the series due to a hamstring injury. With Indian bowlers failing to make a mark, it is likely that the team management will make one change in the playing eleven, getting in Ishant Sharma ahead of Bhuvneshwar Kumar. ALSO READ — India vs Australia 2015-16: Host’s likely XI for 2nd ODI at Gabba

There is no need for India to tinker with the batting line-up. The form of Shikhar Dhawan remains a concern but he had scored a fine 74 in the tour match ahead of the series and the team management would like too give some time to the dashing opener to find rhythm. MS Dhoni’s decision to bat up the order is also beneficial, with the likes of Ajinkya Rahane and Ravindra Jadeja to follow. ALSO READ: 2nd ODI at Gabba to be tryout for future day-night Tests

The Australians will be resting their all-rounder Mitchell Marsh in this game, and David Warner has already left the squad to be with his family to welcome the birth of his second child. Warner was blessed with his second baby girl, who was named Indi Rae Warner.

It will be crucial for India to win this clash, or else their chances of winning their first-ever bilateral series will decrease heavily. Let us take a look at the likely key battles we may get to see in the second India versus Australia 2015-16 ODI, at Gabba in Brisbane:

Rohit Sharma vs Josh Hazlewood: India made merry against an inexperienced Australian bowling attack on a poor bowling pitch at the WACA, Perth. Rohit slammed 171 not out, and he looked unstoppable on Tuesday. It will be crucial for India that Rohit continues to score heavily, and to counter this threat, Australia will need their ace bowler Josh Hazlewood to come up with something special. Hazlewood was Australia’s most impressive bowler in the first ODI, and the hosts will need him to stop the Indian run-machine.

Virat Kohli vs Joel Paris: Among the two debutants at WACA in Joel Paris and Scott Boland, it was the former who had a comparatively better outing. Paris opened the attack with Hazlewood, and did well to impress with his left-arm bowling. However, like the other bowlers, he too was guilty of gifting the Indians far too many deliveries on their pads, which were easily utilised by Virat Kohli. The Indian batting mainstay would want to continue the good run that has just begun, and Australia will pin their hopes on the left-armer Paris to account for Kohli.

Ravichandran Ashwin vs George Bailey: The Australian batsman scored his only third ODI century in the first match, and he would aim to continue the good work. Ashwin, on the other hand, was embarrassed once again as he failed to make any mark in the first game on a flat deck that had no turn at all. The game will be a litmus test for Ashwin, as the questions of his abilities to take wickets overseas continue to linger on, and to counter that, he will eye the wickets of the Australian batsmen like Bailey who are slightly feeble against spin.

Ishant Sharma vs Steven Smith: Apart from Shami, it is Ishant Sharma who has been the most improved Indian seamer in the past one year. Under Kohli, Ishant discovered mojo in Test cricket and with him being ready physically to play in the second ODI; it could be his responsibility to counter the Australian skipper Steven Smith. The right-hander has been scoring runs every time he is facing India, and with Ishant and Smith not facing off much in ODI cricket in the past, it could be a thrilling contest.

Barinder Sran vs Aaron Finch and Usman Khawaja/Shaun Marsh: With his impressive debut at Perth, all eyes will be on Barinder Sran to counter the threat that the Australian openers pose. The left-arm Indian seamer is likely to open the bowling attack, and with his variations, he would pose a big threat to the Australian openers. Warner is not playing in the second ODI, which means either of the left-handed batsmen Usman Khawaja and Shaun Marsh will partner Finch at the top. Maybe, on the basis of current form, Khawaja can get the nod ahead of Shaun. Barinder Sran: Debut in 1st India vs Australia 2015-16 ODI has released pressure 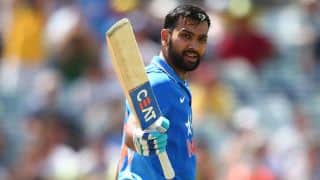 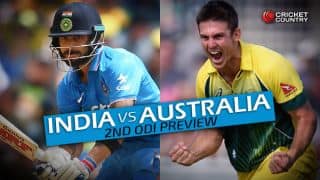