India will mostly go unchanged for the 3rd ODI at Melbourne.

With back-to-back losses in the first two games of the five-match One-Day International (ODI) series, India are now on the back-foot. The pressure to win the third ODI and keep the series alive will play on their minds as they travel from Brisbane to Melbourne to compete in the must-win encounter. After posting 300 plus scores in both the ODIs, it is their bowling, and to some extent their fielding, that has let them down. Skipper MS Dhoni’s strange decisions of holding back Barinder Sran in the first ODI and playing two spinners on the un-assisting tracks too have come under scanner. So, what changes can the ardent fans of team India expect in the third ODI? Anything but on team combination, opines Chinmay Jawalekar, who takes a look at India’s likely XI for the 3rd ODI. FULL CRICKET SCORECARD: India vs Australia 2015-16, 3rd ODI at MCG

Engine-room: India’s engine-room, comprising of the top three batsmen, has been as solid as it can get in the two matches so far with the only exception of Shikhar Dhawan. Star opener Rohit Sharma has been in a sublime form, notching up consecutive hundreds. Not just the elegant Mumbai batter has got vital runs at the top of the order, but he has played long, ensuring the team reaches to a competitive total. Unfortunately for him, the team has ended-up on the losing side, both times. Same goes for Virat Kohli, who has got fifties in both the matches.

However, Dhawan has remained the chink in the top order’s armour. The dashing southpaw has failed miserably in both the matches so far, putting extra pressure on the batsmen to follow. Given his poor run, it is only logical to play Ajinkya Rahane as an opener instead of Dhawan and squeeze in either an extra batsman or an all-rounder in the line-up. But this is still unlikely to happen, as Dhawan has got the backing of his captain and the team management. He is likely to get an extended run and is all set to play at his second home on Sunday.

Middle-order: Rahane was exceptional in the second ODI with a blazing 80-ball 89. The only thing probably he did wrong in his innings was not to stay till the end. His dismissal towards the end of Indian innings made the difference of at least 20 runs. In perfect batting conditions, it was important that Indian batsmen gave that extra cushion of 20-25 runs above the par score to the struggling bowlers, which did not happen, and eventually cost India the game. Manish Pandey got just a couple of overs to bat which means he cannot be ruled out from the third game. Thus, Gurkeerat Singh’s wait for his chances will only get extended. Dhoni at No. 6 will complete the middle order. READ: India vs Australia 2015-16: Host’s likely XI for 3rd ODI at MCG

All-rounders/Spinners: Indian spinners have not really done much so far. They were taken to the cleaners at Perth and in Brisbane too, they could neither take wickets nor contain the flow of runs. Dhoni’s persistence with both Ravichandran Ashwin and Ravindra Jadeja is rather baffling given the conditions on offer are not at all conducive for spin. The fact that Australia have not even picked a specialist spinner in the squad only underlines the statement. The beleaguered captain has made it quite clear that the 3-2 (seamer-spinner) combination is best for the team, meaning that there is still no place for Himachal Pradesh all-rounder Rishi Dhawan, who the captain has little faith in. So, in all probability, the team will once again field both Ashwin and Jadeja.

Pacers: If the spinners have not done well and come under criticism, the pacers too have been far from being effective in friendly conditions. Sran was good in the first game, but could not keep a check on the run-flow and was ineffective in Brisbane. Ishant Sharma made a comeback from the injury and was expected to lead the pack, but all he could do was dropping a sitter and contributing to the woes of his team. Umesh Yadav was the most expensive of all, and should make way for Bhuvneshwar Kumar, who bowled economically in the first match.

On the whole, there will not be any surprising changes for the third ODI. One could feel for the likes of Rishi Dhawan and Gurkeerat. In normal circumstances, they could have been drafted into the playing XI at the expense of a spinner or out-of-form Shikhar Dhawan. But Dhoni has his own unusual ways of operating and it should not come as a surprise if they end up not playing a single game on this tour. 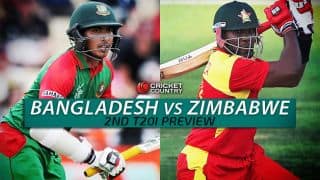